‘This one will be an easy pass’, he said.

‘There’s a Hasbro version of Roadbuster coming out’, he said.

‘I have no need for two Roadbusters’, he said.

And  y’know what? I think he was right.  Cos this thing is 'effing epic.

The fourth in FansProject’s Warbot series and the second in the ‘Core’ line of robots introduced with WB002 - Steel Core, Revolver is a big blocky thwack of Third Party fun.

And in true to form fashion, the designers at FP have put their own stamp on G1. One glance at him in the box and you know where you’re at here. It’s definitely Roadbuster. It’s just not particularly accurate to any one take on the character. What it is, however, is definitively FansProject.

Angular, chunky, squared off and pointy with that distinctly anime flavour, Revolver Core is a military muscle machine, presenting a look that screams not only strength but agility with it.

And he’s got some pretty great articulation to back up that aesthetic. Nagging things like the armour around his ball jointed head blocking full movement bring it down a bit, but double jointed knees and foot rockers lift things right back up again.

Some joints are not so much loose, but a bit more ‘fluid’ than I would like. The waist and one elbow on mine. I can live with that. I’ve been putting this thing through its paces too.

Like any good Wrecker, sorry.. Warbot, Revolver comes packing heat. Twin pistols, a laser rifle and a cannon. And these beauties, as you can see from the photos, are modular too. 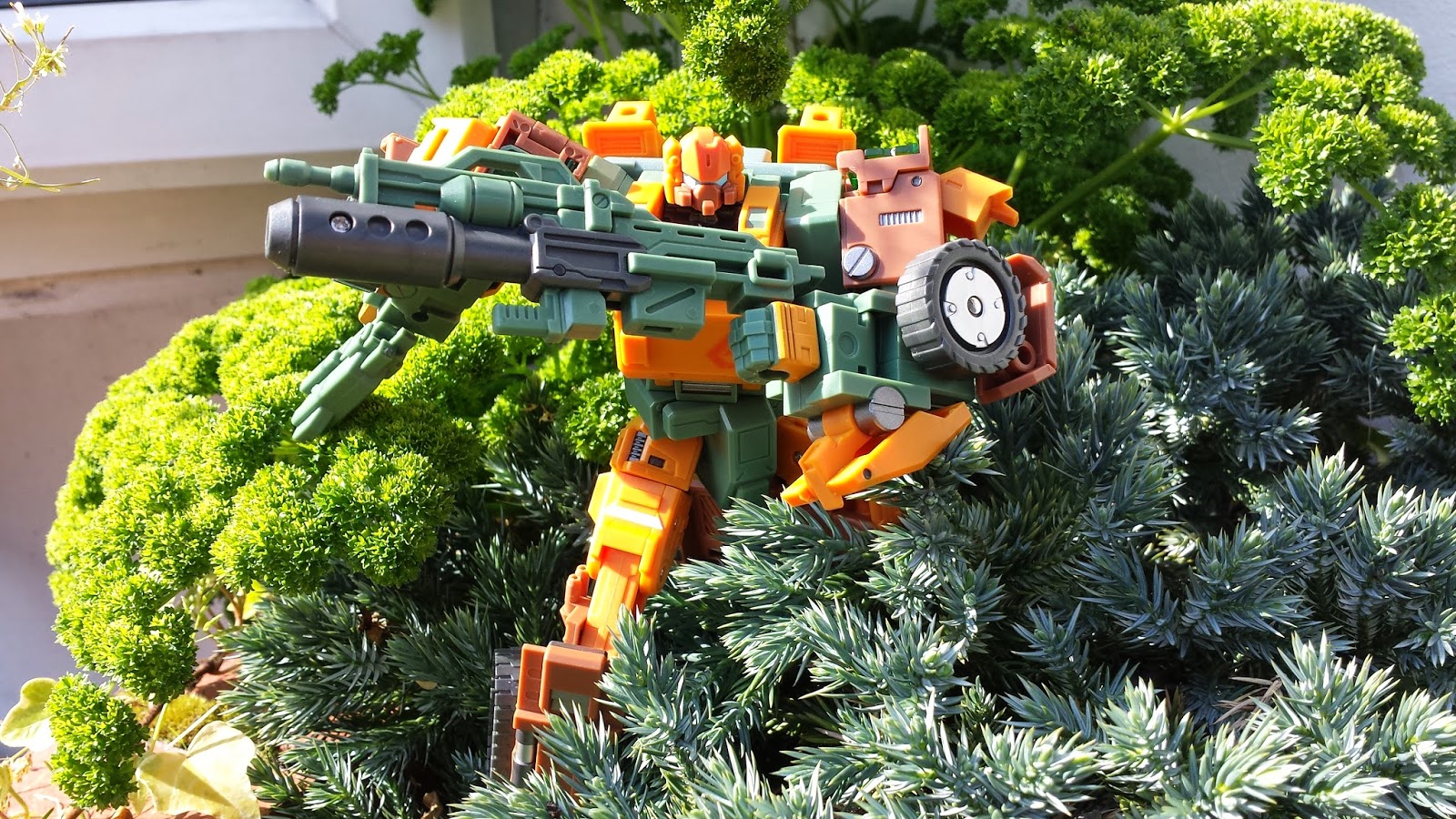 An engine resides in Revolver’s back. 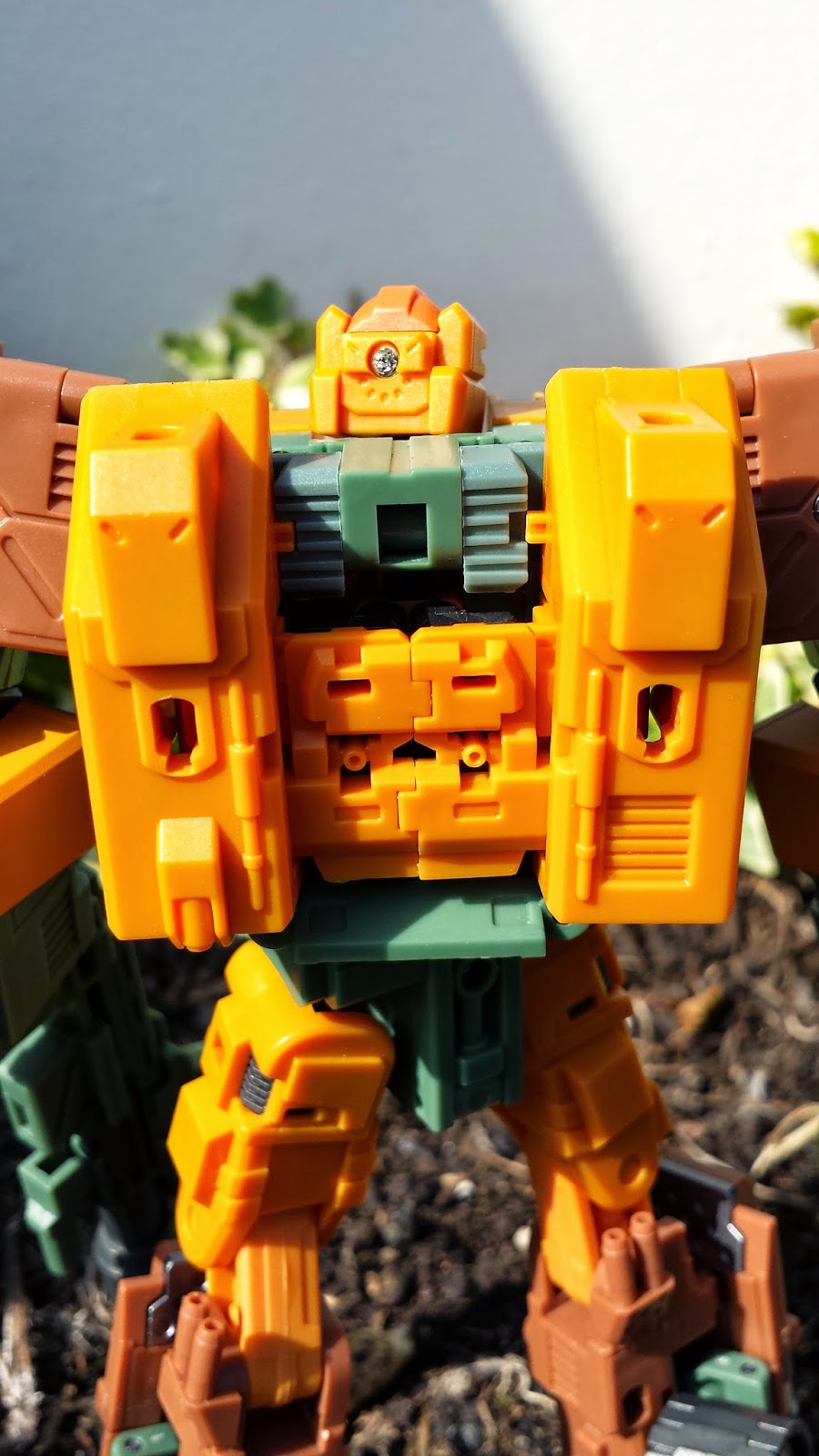 This piece is a transformable robot, with ball joints and swivels and an overall spot on attention to detail.

In the fiction FP has given us to accompany this line so far, these smaller robots combine with weaponised larger bodies. Very, um.. very Masterforce. No complaints here though – it's an extra element of play and integral to the Warbot story. But if you don’t like it you can hardly tell it’s there.

Transformation to vehicle mode is surprising. Somebody has been taking notes from Jizai and the Function X line and I’d like to buy that somebody a round of high fives. Arms twist and fold in myriad but understandable ways. The legs are clever too, folding backwards into themselves while the shins go and meet his back panels to form the rear of the car.

Plenty takes place during the conversion and while it isn’t in quite the same league of oil based origami that the F(x) line has treated us to, it's a well thought out and enjoyable slice of engineering.


We end up with a halftrack jeep slung low to the ground, slow looking but powerful.

To be honest this mode is never going to set the world on fire but getting here was eye opening and it’s a lot of fun having his smaller self interact with the vehicle. Because pilot.
It doesn’t roll freely which is a shame – no tiny wheels within the treads, alas

In closing, this is a damn fine release from FansProject.

Revolver is full of play features and badass good looks, meaning the Warbot line is back with a bit of a stormer. The modular weaponry is a lovely touch, the transformation is a lot of fun and I enjoy the 'Core' interaction with the smaller robot.

Above all else though, he's scratched my Roadbuster itch with consummate skill.


(NB. Revolver can interact with the recently released Riftshot and Recoiler Core retools, each of whom comes with attachment pieces. This adds further modular options to the figure, not just in terms of weaponry but in armour options for both robot and vehicle modes. Sadly, these have been a FPC exclusive thus far. Let's get them on a general release, eh?)
Posted by BOASTFULMANFISH at 12:37 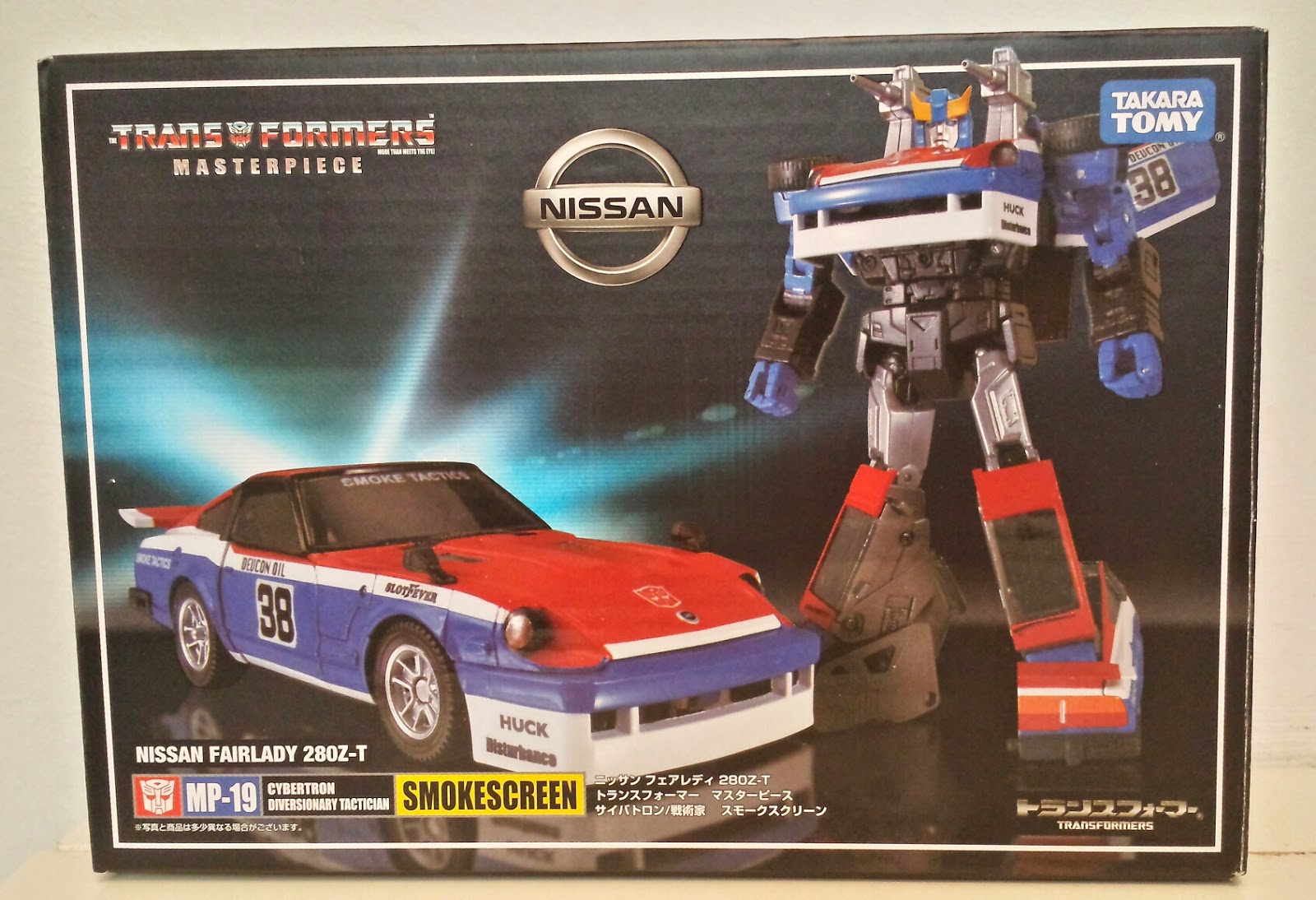 MP-19 Smokescreen is the third use of the excellent, excellent Datsun body type. Previously released as the almost universally adored Prowl and Streak, this one features some significant retooling, a killer paint job and has also managed to raise eyebrows and cross arms in some quarters of the fandom.

Revisiting the toy for the purposes of this review was an opportunity to get down and dirty with the Datsun mold again.

And it is a wonderful thing. The conversion mimics the transformation in the cartoon and manages to be challenging yet intuitive. Taking Smokescreen back to car mode was the first time I had done it since Christmas Day. It was pretty damn fun, with no ‘?!’ moment, the only thing I found a bit tricky being the legs coming back together. 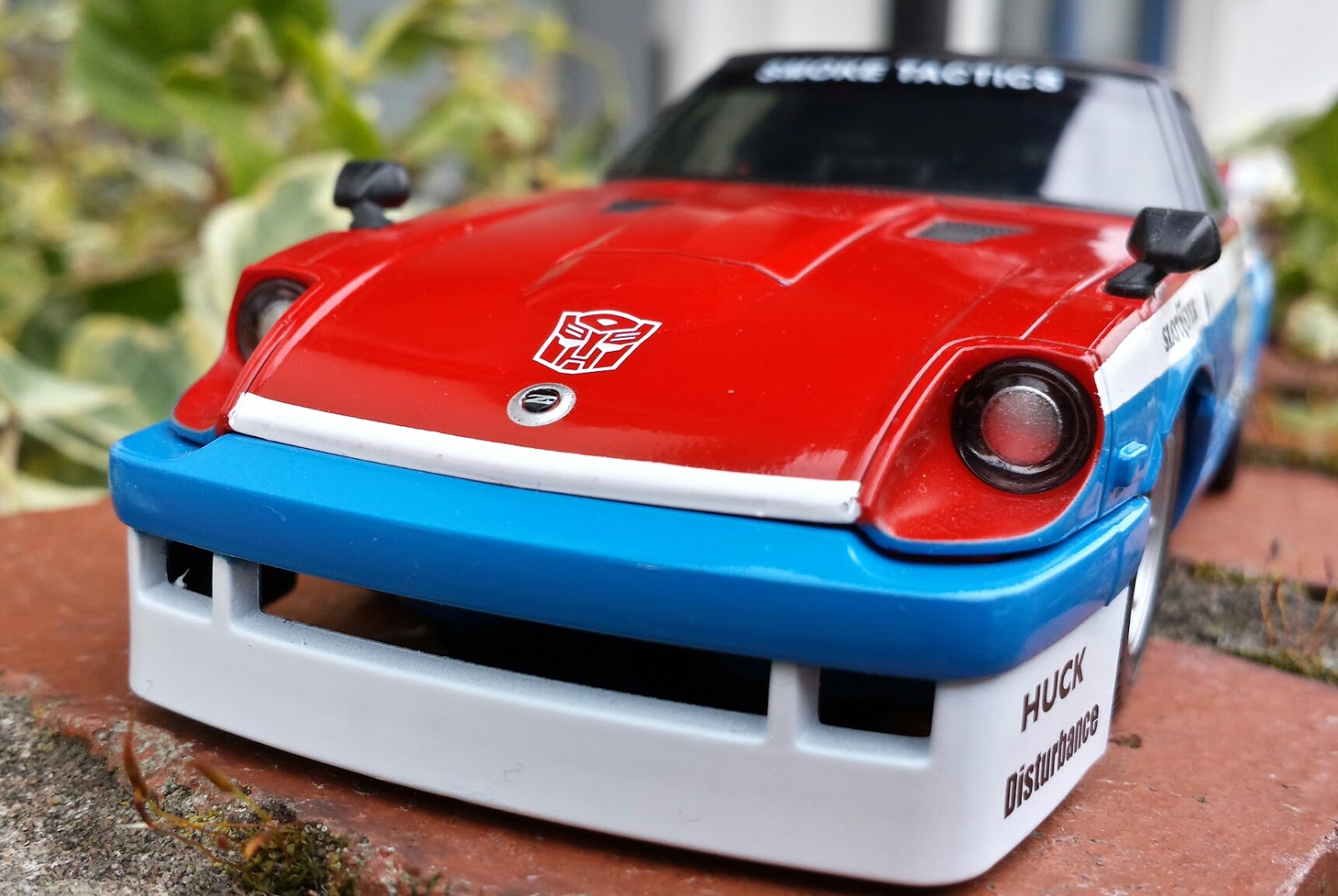 A licensed Nissan Fairlady 280Z-T painted up in red white and blue racing livery. The colours are beautiful and the car has a new, ground hugging bumper as well as a spoiler.

While the sponsorship tampos across the car are fake, they do look good. The ‘Slot Fever’ one in particular tickles me up. Smokescreen really was a bit of a dick in ‘The Gambler’ episode, throwing Prime et al to the wolves when he blew it on the slots and I admire him for wearing his addiction with pride.

Of course this sponsorship fakery has prompted understandable criticism (this is a Masterpiece figure) and a Reprolabels set is available to fix this. Personally, I’m not about to cover up the brilliant paint job with stickers just yet. I’m glad the sticker set is available though. There has been a huge call for it.

In robot mode, Smokescreen does what every Masterpiece since MP-10 has done and looks as if he has walked out of the cartoon. Ironically that’s probably his biggest flaw.

The new front grill makes him look a bit on the chunky side, as it does in the show.

The headsculpt is accurate but..

..the headsculpt is accurate. For some, this one has been a real problem. 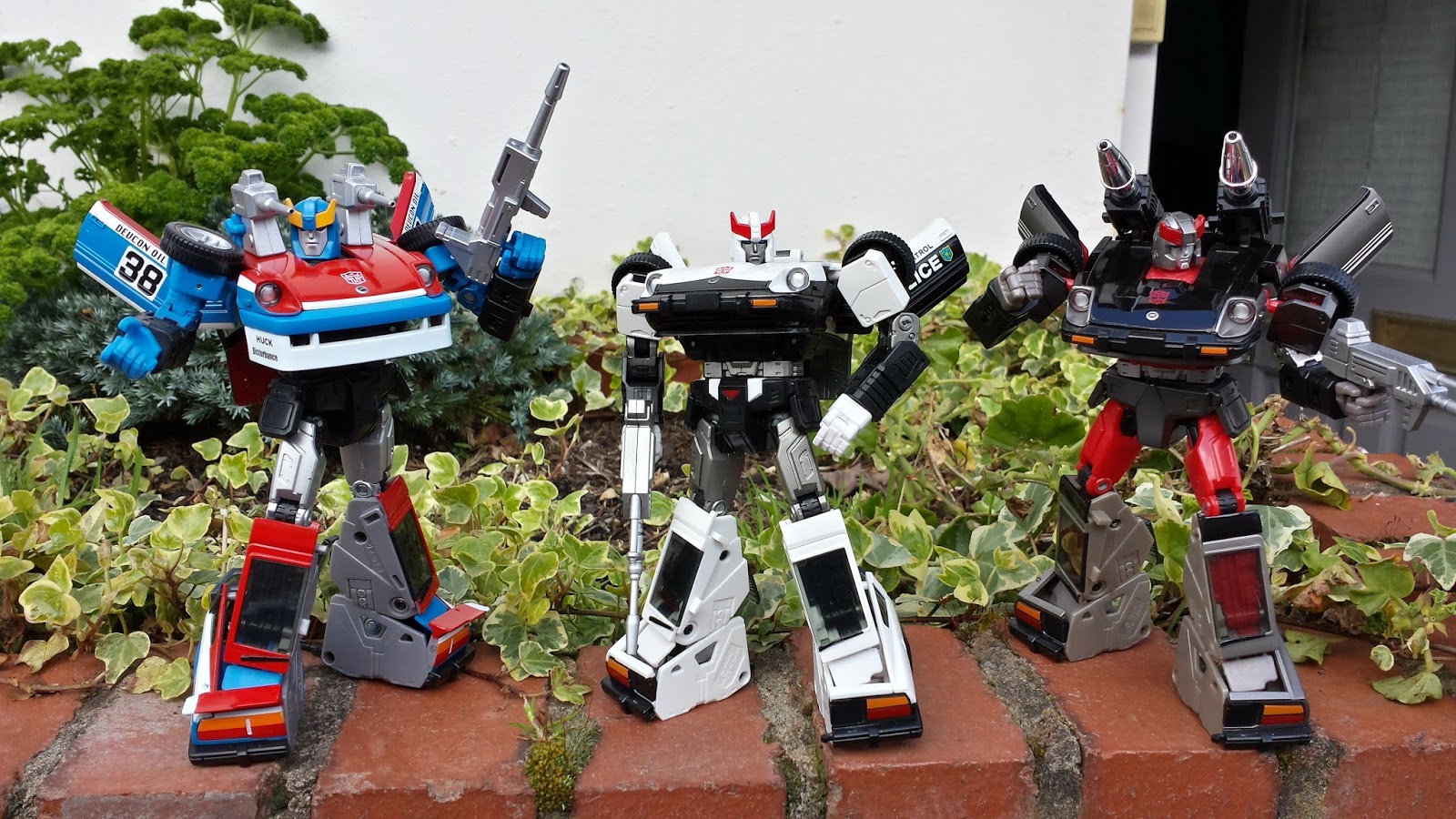 My main issue is that he just seems a lot more - and I struggle with saying it cos he is one (albeit at the higher end of things) - ‘toylike’ in robot mode than his brethren. I don’t know if it's a case of his colour scheme being so much more in your face than the other two or if it's his tubby little features, but something doesn't sit quite right with me here lining them up.

It’s a cartoon accurate Smokescreen and I’m dissing him for it..  There’s my ‘?!’ moment.

What does shine through regardless is that this is one fantastic figure to fiddle with, being highly poseable and rocking excellent build quality. Personal feelings regarding aesthetics cannot do a disservice to the shapes that Smokescreen can throw, the overall finish and the quality of the toy.


It's just strange how a couple of changes can alter ones perception of a figure essentially bought and loved twice before.