DX9 had a good 2015, branching out from their associaton with Unique Toys, releasing some nifty little Legends figures (Hulkie still to land, ZOMG!) and making quite the name for themselves with Carry, their take on a Masterpiece scaled Rodimus Prime. It was a good toy, nay it was a great toy, and a very well received one to boot. Riding that wave of momentum comes their logical next release - Tyrant. Yes, Prime's nutzoid nemesis gets the pseudo MP treatment as DX9 draw first blood in the Third Party Galvatron Wars.

Now, I like Galvatron. Look at his G1 cartoon origins; As Megatron reborn, this initially cold and clinical beast develops God sized daddy issues, fails at taking on his chaos bringing stepdad and becomes a raving twinkle horned lunatic in the follow up episodes after a prolonged nap in molten lava at the hands of Rodimus Prime. Sometime afterwards the big fella doesn't take too well to the idea of forced therapy to help him through his trauma, so blows up the planet his treatment takes place on. Personally.

That's the kind of music that sings to me, so a high end toy of Galvatron has expectations to live up to. Is Tyrant worthy of your your hard earned cash? Well.. 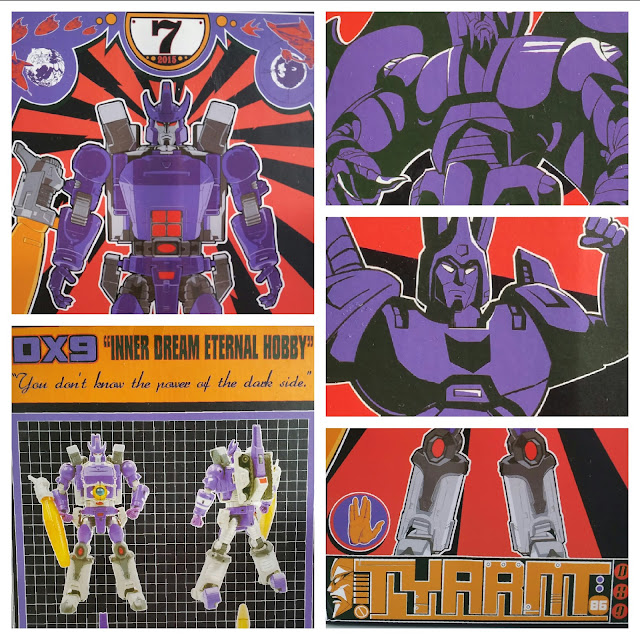 I don't usually prattle on about packaging but this is a midnight carnival of garish colour and noise, full of lawsuit baiting imagery and phrasing along with what may or may not be teases to future releases. They don't even spell his name right. It hurts my eyes, I enjoy its bravado and we're done.


Tyrant comes packaged in robot mode, and straight away you have a fix to do. Urgh. You have to swap out the hip panels. Which were popped on the wrong sides at assembly. It's easy, but something to be aware of. That out of the way, Tyrant is a sight to behold. There's no escaping the bang up job DX9 have done here. From the three pronged crown to Sir's choice of golden or sparkly particle cannon, this is Galvatron through and through and it's kind of brilliant. Initial impressions out of the box are heavy, solid and purdy.


That initial feeling of high quality continues as you have a good mess about, with chunky ratchets and tight friction joints abound. There's a good range of motion available to you which means some dynamic poses are easily within your grasp and the cleverly die cast feet do a good job in keeping him well grounded if not looking a bit bizarre. Which makes it all the more infuriating to have such a daft outward hip ratchet. From neutral...

..to damn! I mean, why? Thankfully there's enough play between the ratchet detents to circumvent some of this but it's a frustrating design choice. As are the fingers, which look great and are full of articulation - ball jointed knuckles, hinged fingers - but they're so small and loose and worrying. They don't stay in a position well and most of the time I find myself balling his fists to avoid using them at all.

Still, these gripes are gripes you can work around, and I write this just realising he has an upper bicep swivel (it's tight!) which means I can now access the double jointed elbow and add valuable XP to my Tyrant's articulation level. Result. 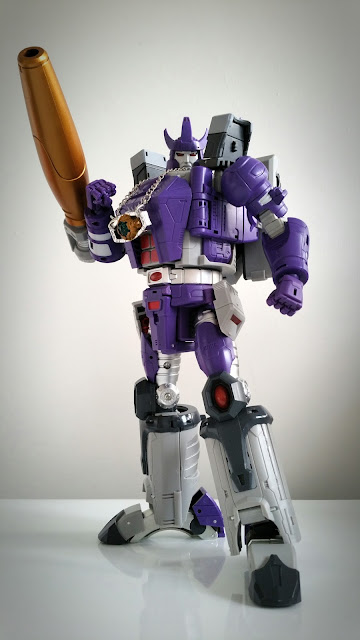 Accessory wise, Tyrant comes with his particle cannons in both animation and toy flavours, a (huge) Matrix and a chain for him to wear it around his neck. My Matrix appears to have been er.. 'appropriated' by my nephew so you'll have to make do with him wearing MP-10's.. it fits better anyway. His cannon actually contains a blindingly bright purple LED torch. The neighbours hate it! Magnificent stuff. 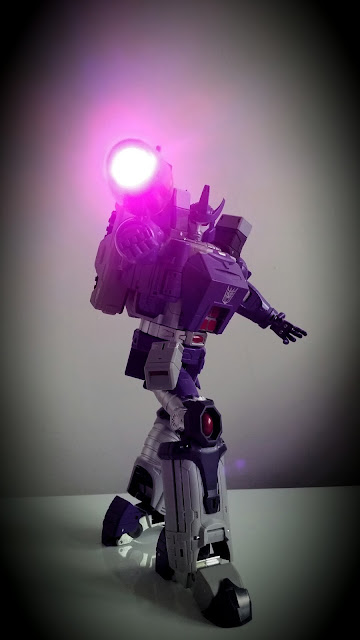 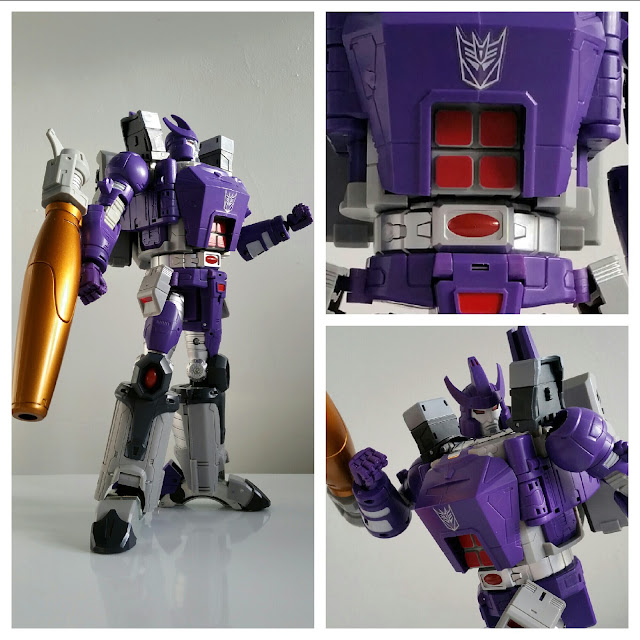 As you take your eyes on a tour of the figure, you'll see so many things that are so spot on to the original cartoon character yet the designer was not totally beholden to the animation model, so his alt mode treads end up on his back to no detriment at all. It's a choice made to keep the robot mode clean and works, though you G1 purists might find this a bit jarring. Some have commented on the proportions, that his arms are bit weedy and short but in hand? Nah. Not at all. This is a fantastic representation of Galvatron and both FansToys and X-Transbots have some serious work ahead of them. 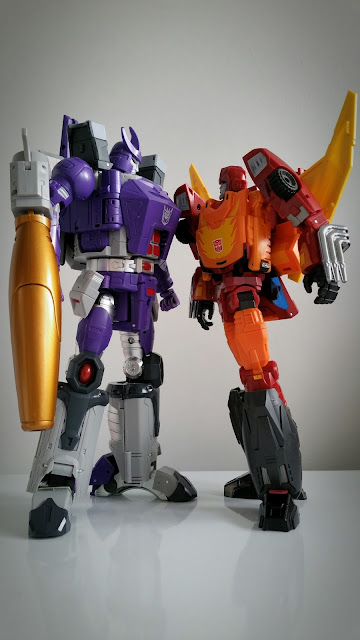 And special mention must go to the head sculpt which is in all honesty, one of the best out there today. It's not just nailed down, DX9 came round to your house with a framed photo of it and put it up in your front room and in my eyes is truly the defining aspect of the figure.


Except for maybe the transformation, and it was from here on in that my love affair with Tyrant started to lose its sparkle. Right, I enjoy a challenge. I do. But Tyrant's transformation just doesn't click with me. First time round I used the instructions. I could've hopped onto Youtube but I thought 'Screw that, Carry was a dream, let's go for it'. GO ON YOUTUBE.

Because it took me 90 minutes and some stressed pieces even though I was was warned about them before using the included booklet.

After finally figuring out how to fit his arms inside his chest I needed a cigarette break. Which seemed apt as come leg transformation time it appears that the writer of said booklet was also on theirs.

Maybe it's just me? I dunno. But for your own enjoyment of an involved and inventive transformation (there's some really nice stuff going on to fill out gaps and maintain solid shapes), don't rely on the instructions first time round because the fun quickly becomes undone. I will also say that in addition to the warnings about these pieces, there are also some wickedly tight tolerances when transforming the leg panels too so be careful full stop. 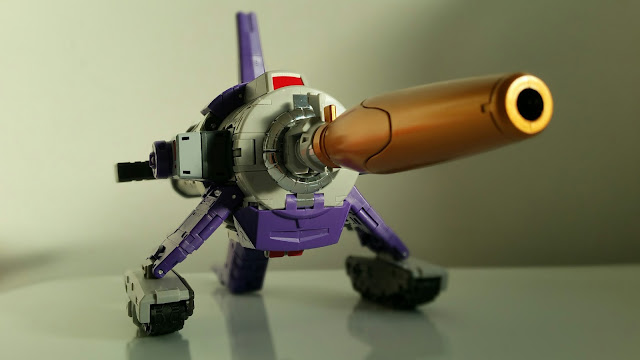 Space Cannon? We'll go with that. It's great regardless, an imposingly chunky bit of starscreaming bloody murder with all the parts on Tyrant's robot mode that seemed a bit understated finding their own voice after conversion. 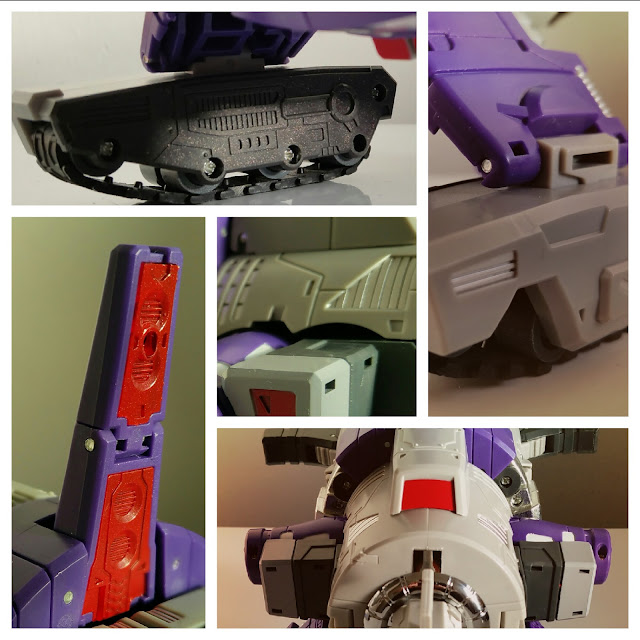 Working rubber treads, chrome, translucent and metallic red highlights and to finish it off the toy almost totally changes its base colour which is an awesome little visual trick. Everything pegs together tightly and you also feel like your hands have been put through an Insanity workout in getting here.

No messing about though, I love Tyrant's vehicle mode. 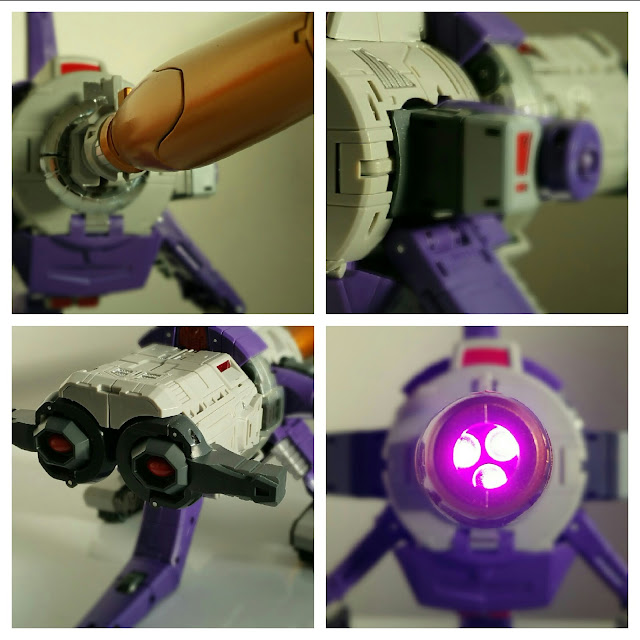 Sadly, going back to robot mode (which as always, is so much easier) I felt that some of the shine had come away from my immediate thoughts regarding the figure. I had damaged it, caused a chip on that chiselled face of his while getting it out of vehicle mode and once I had him back in his robot form left Tyrant well alone for a day. Hmm.

Picking him up to write this review though, well I won't be putting him down for a good while after. Though the days of us finishing each others sentences and staying up drinking into the dawn have long gone now that he's revealed a bit too much of himself that I don't like. 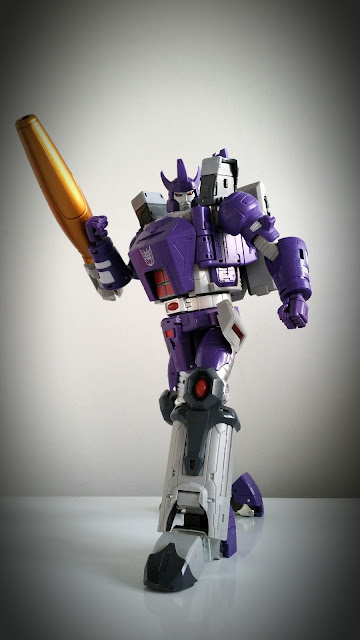 Tl:dr then. Both forms are superb. Getting to one feels like someone has their middle finger in my face all the way through. It's an almost win of a figure but carries some serious caveats to universally recommending it as there is potential for breakage and frustration. The press on this toy has been almost unanimously positive and I'm not going out of my way to piss in the punchbowl, I'm just telling you of my own experience with it. DX9 made one of my figures of 2015. And this one is very, very good. I like Tyrant, I just don't love Tyrant.


You can order Tyrant from Masterforce here and you can read more from Boatful Manfish here.
Posted by BOASTFULMANFISH at 06:39