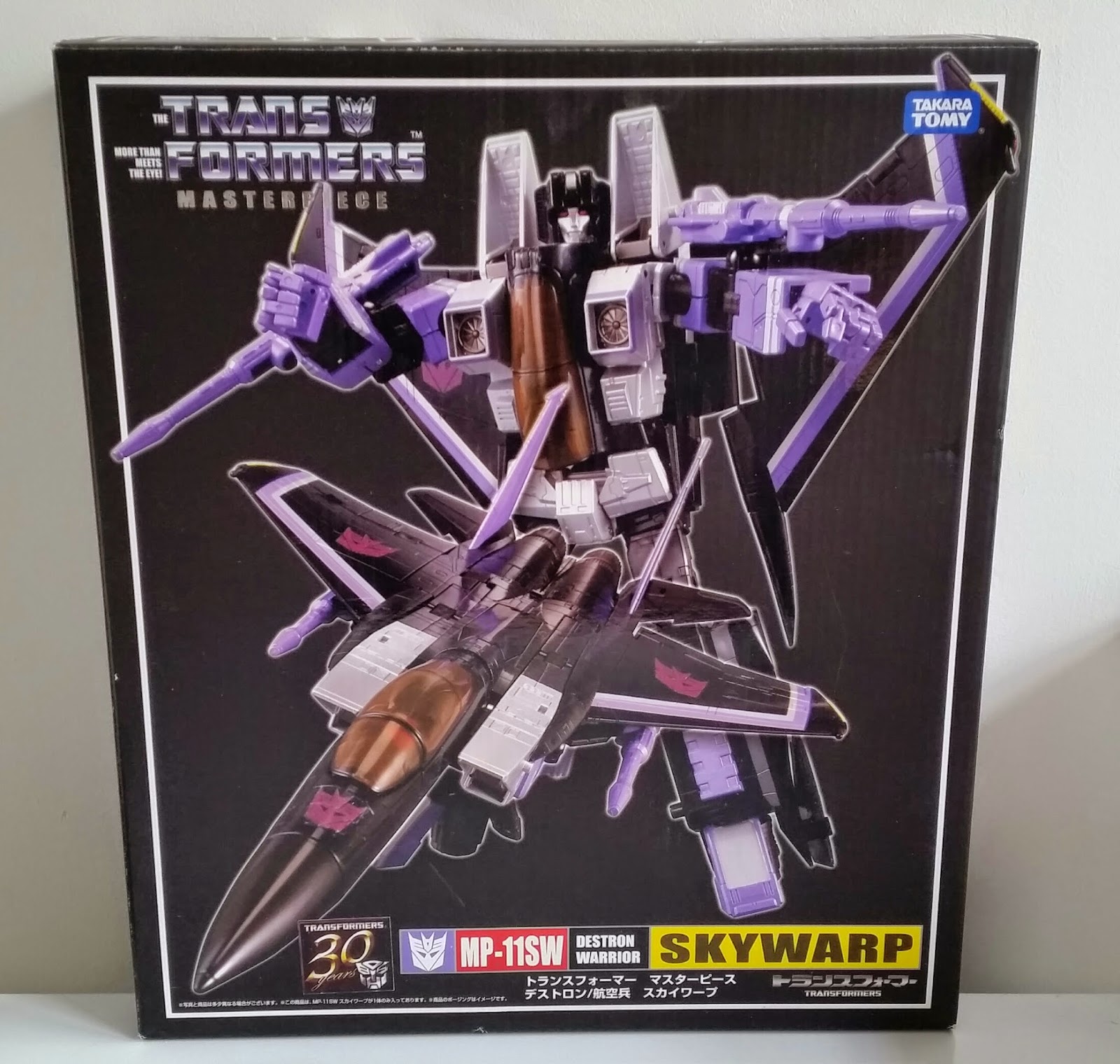 I’ve said before how much Takara love to suck the marrow from their molds. In the case of the Decepticon jets - the Seekers if you will –  not only is it expected, not only do they get a free pass doing it but we lust after these repaints in some kind of hedonistically fevered fervour. We know it’s the same toy, we know it’s just a different colour and WE DON’T CARE HOW MUCH IT COSTS BECAUSE WE NEEDED IT YESTERDAY.

Plus this one is Skywarp. That colour scheme? That (wonderfully misused according to his bio) teleportation ability? That bit in episode 3 where it was like fightin' a shadow?

In a nutshell, you knew if this Transformer was for you the second it was announced.

Warping in using the heavily retooled MP-3 mold first flaunted by the sex on a stick MP-11 Starscream, this Skywarp redux sneakily suggests Takara have further designs on your wallet. Because let’s face facts, this has got to be two of three. There’s a Hasbro Thundercracker out there rocking dubious Reflector tatts. Takara ain't gonna let that slide. 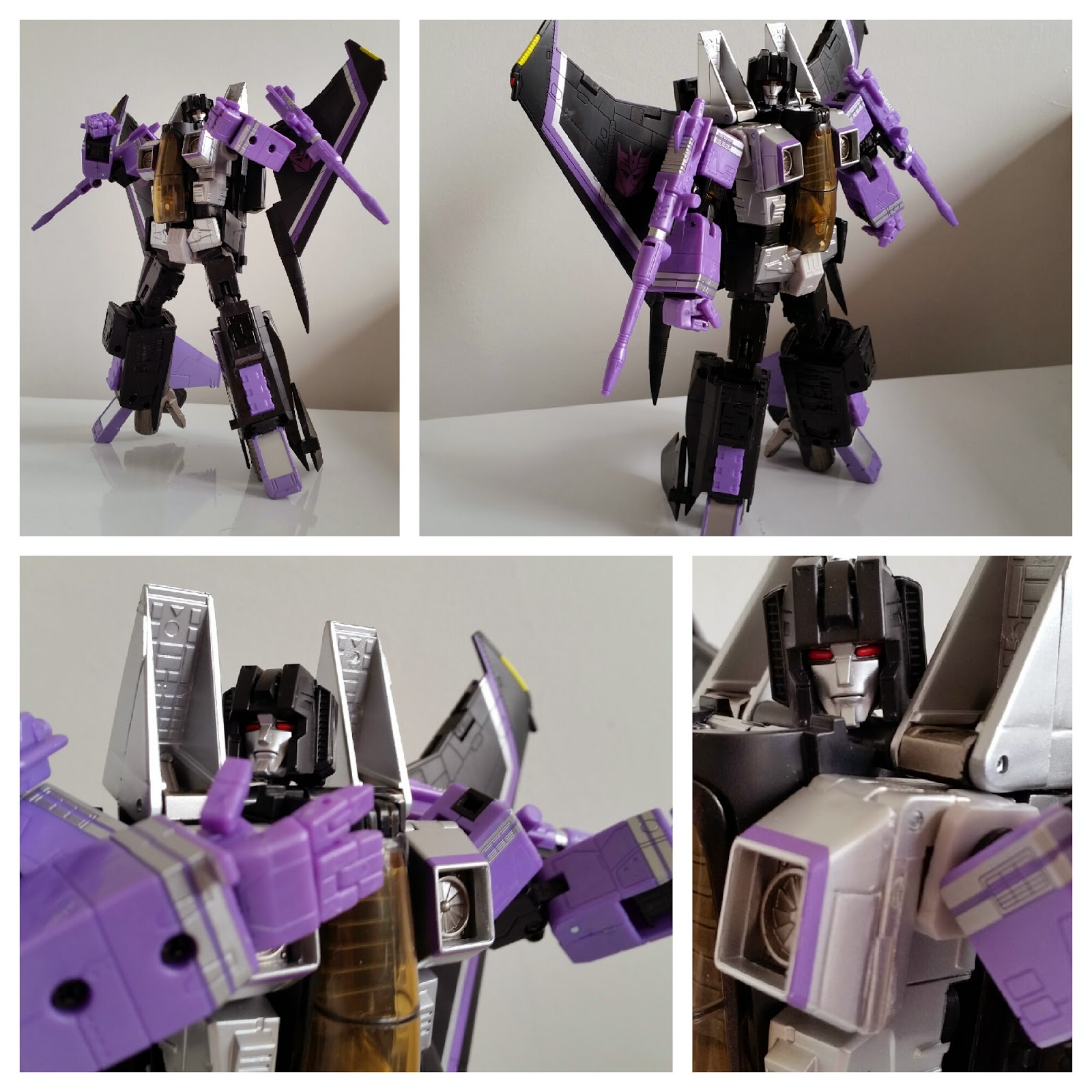 What an awesome looking robot. I’ll admit I was utterly cold towards him initially but that was my inner cynic putting in a rare appearance. I’d not long racked in Sunstorm on the cheap and being very familiar with the Masterpiece Seeker toolings anyway I found myself approaching Skywarp from a rather ‘meh’ stance.

Skywarp’s deco is classic ‘Con colours and evokes both toy and cartoon gloriously well. The colour scheme is beautiful to look at, the paint is well applied in the main (a few spotty parts, it's a mass produced figure, nothing I'd get militant about) and while it might lack the ‘Ooooooh, shiny’ gloss of his 2007 predecessor, the overall look is an undeniable victory. 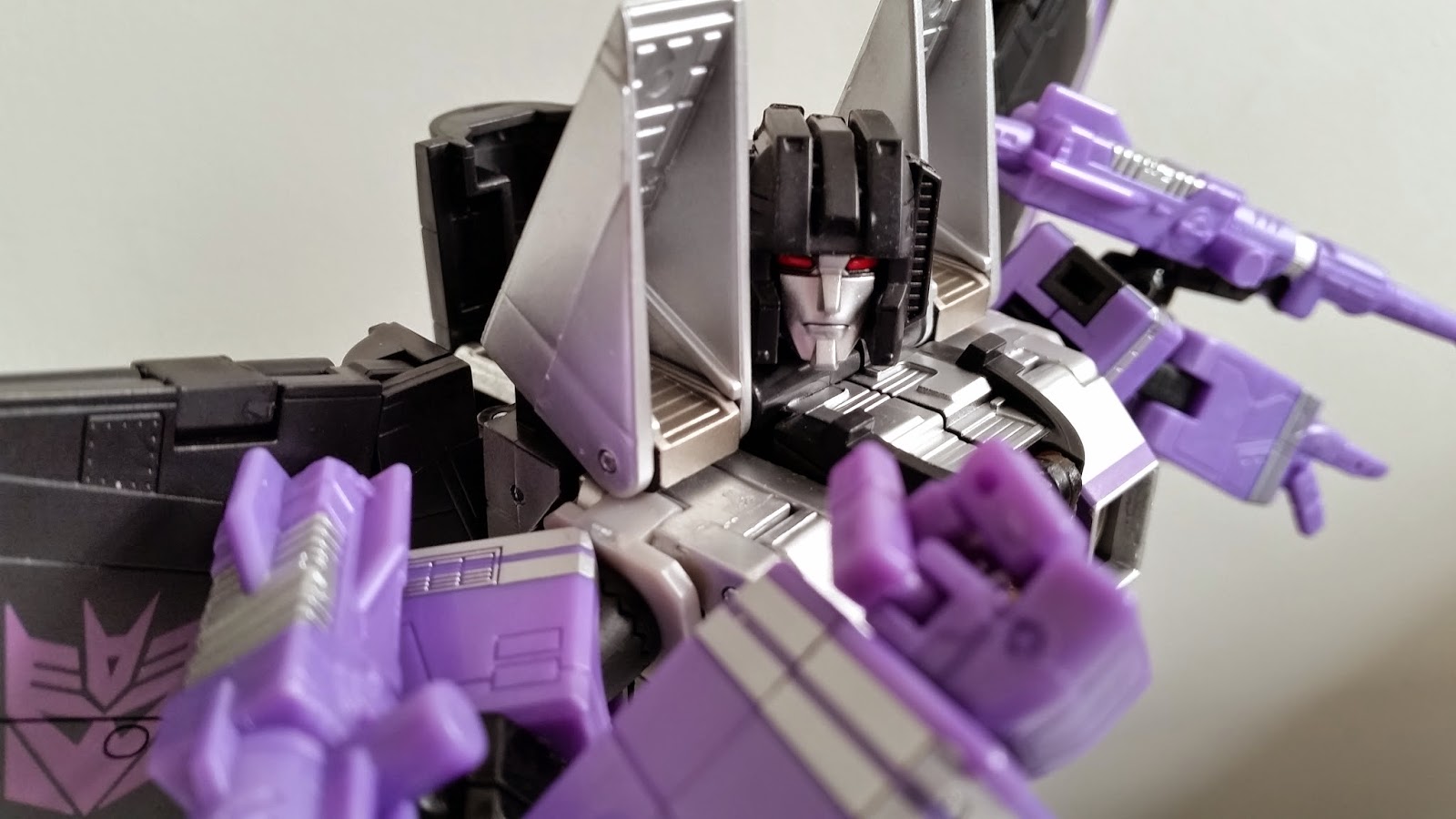 Speaking of victories, compared to the Hasbro released Sunstorm and Acid Storm, everything likes to stay put on Skywarp. The tail fins on my 'Storms fall off if you look at them funny and the wings are loose. Not so here. Joints remain tight, decent poses can be achieved and my only real beefs are the pretty dire foot articulation and lack of stand. He can’t hover looking all smug and bastardy unless you happen to have a spare from another figure, alas. But you do get another Dr Arkeville pilot and Megatron pistol.


Transformation is a complex one, but with a learning curve that once nailed down makes you appreciate the engineering savvy that went into getting from that robot into this plane.

I'm just going to let the photos speak for this one. 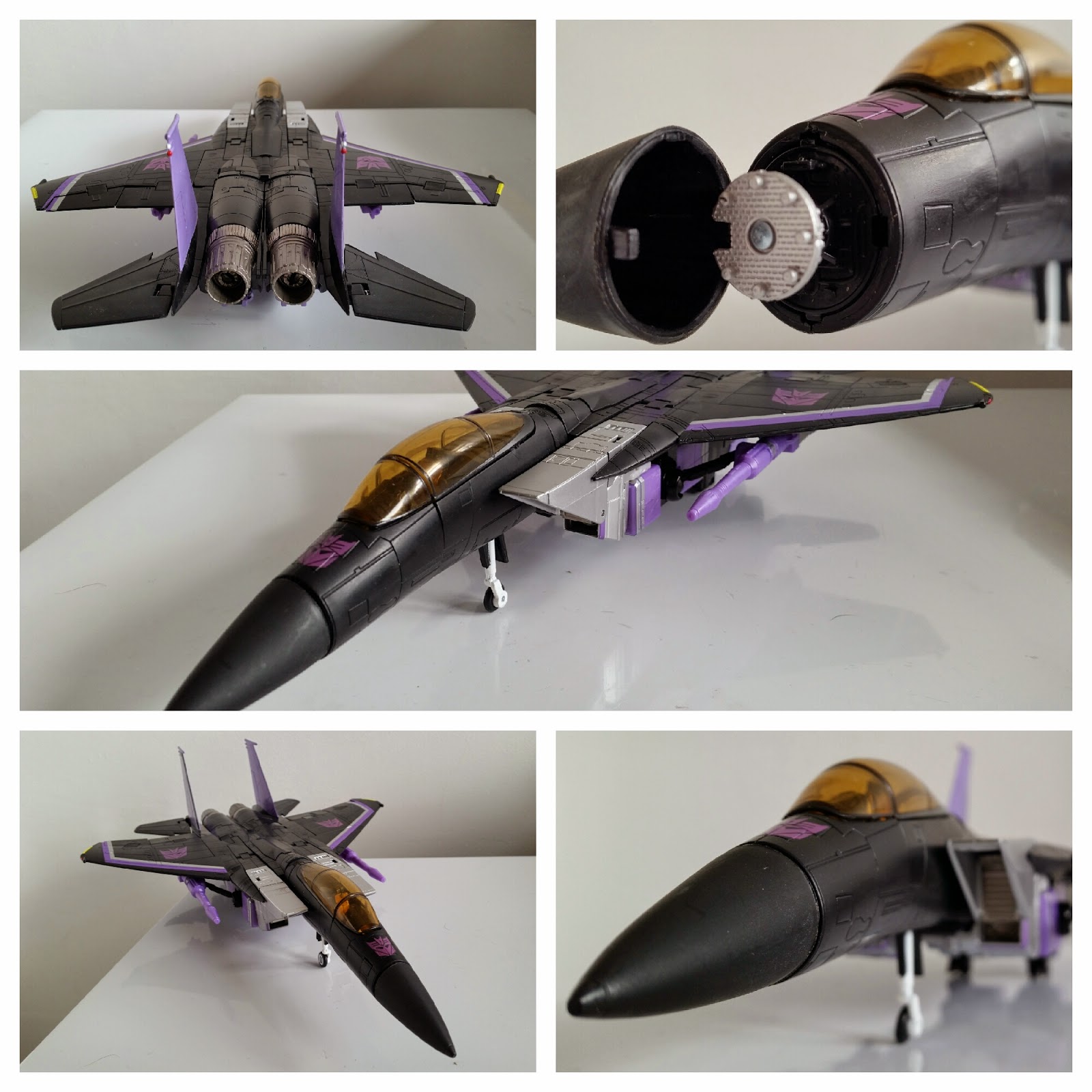 Although it is here that I really bloody miss that stand that came with the original toolings as well as with the Hasbro MP ‘Storms. 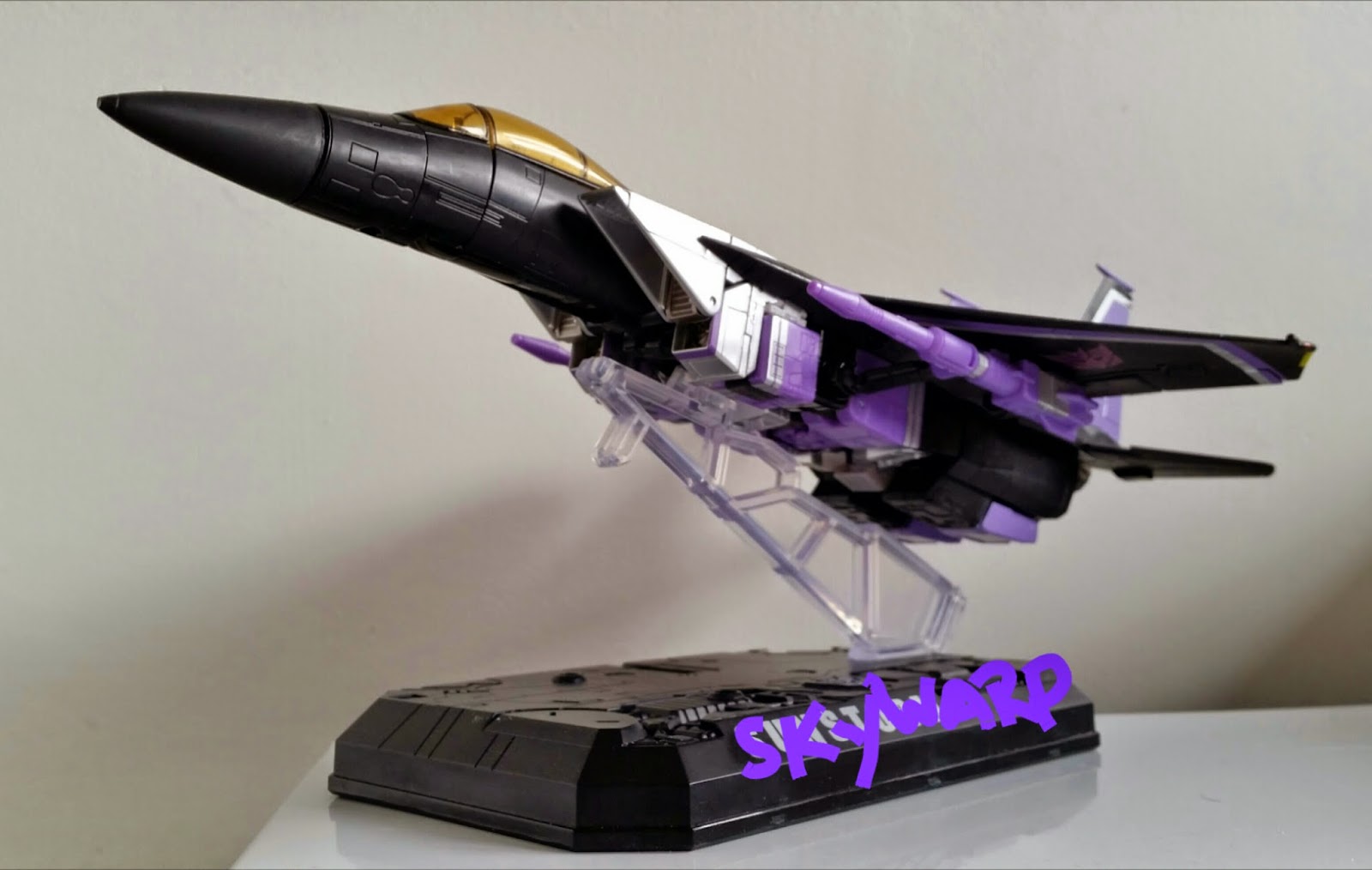 This a strong repaint where the only real thing getting in the way is price. Minor foibles about a lack of useful accessories aside, if you’ve got the coin handy you’re not going to be disappointed once you get him in hand. The actual figure itself remains superb and looks fantastic in these colours. Yes it’s a predictable and bare bones release, but it’s also predictably necessary for that Decepticon Masterpiece shelf you’ve been cultivating.