Can DX9's ninja fight off all contenders and be the best Sixshot of all? 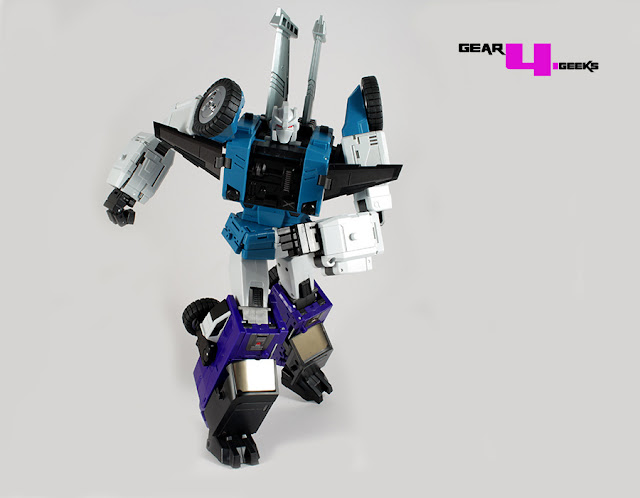 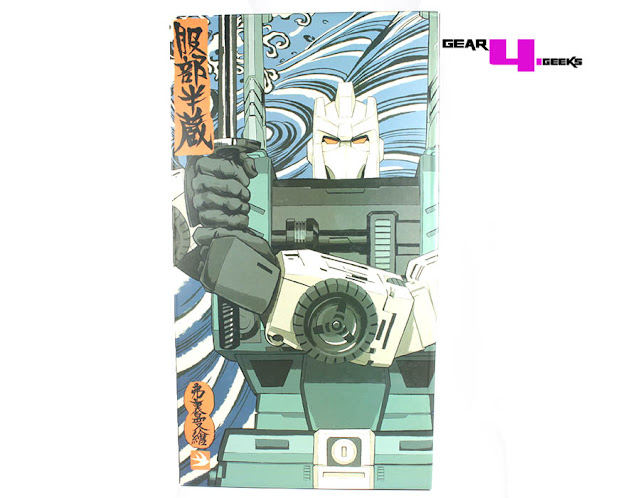 Hattori Hanzō (Hanzō Hattori using Western naming) was a ninja during the Sengoku period of Japan's history where civil war waged for 136 years. Hanzo was a key player in the Tokugawa clan who would eventually reunite Japan leading to him becoming a famous hero of the era. As time passed his fighting prowess becoming greatly exaggerated and often is cited as having mystical powers so it's a fitting name for DX9's version of the Transformer Sixshot - a ninja in the Japanese canon who's abilities have been magnified infinitely in the IDW comics to make him a one robot planet destroyer. 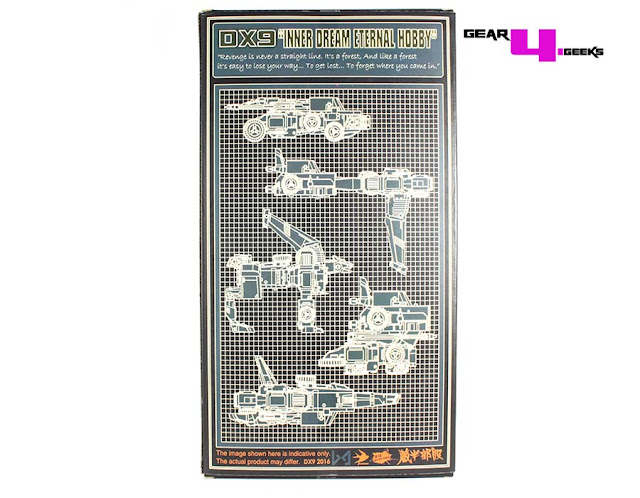 DX9 have done a great job here with the packaging which is reminiscent of traditional Japanese artwork, again referencing the Hanzo lore. Inside the box we get Hanzo himself, 2 swords, 2 hand guns and 2 ninja throwing knives which have been made nice and chunky. Like MMC's rendition, the swords can attach to the waist of the figure but there's no scabbards for them which could have been a nice touch. A favourite feature of mine is that a set of wheels is included that can be attached to the robot's forearms to give all 6 modes a more kibble-y feel or can be left off for a sleeker look. Personally I decided to leave them off as they seemed to detract from all except the robot mode. This is something that I'd never considered before but it gives collectors a little bit of choice in how they want their figures to look, something other companies should definitely adopt. 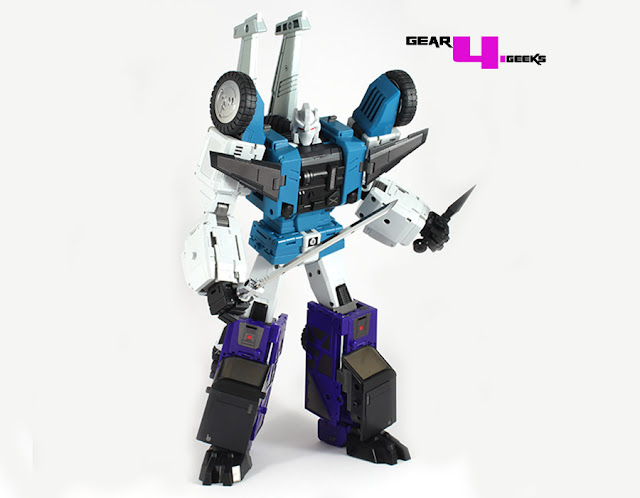 When DX9 announced Hanzo the reaction seemed somewhat mixed from the fandom. On one hand Hanzo seemed to be a perfect rendition of the cartoon version of Sixshot, but the simplified model of the cartoon can make the toy versions seem somewhat plain; a criticism that also dogged Masterpiece Ironhide and FansToys' Lupus, both of which were actually fantastic once in hand. Hanzo follows firmly in their footsteps by being somewhat underwhelming until you have him in hand and then he comes into his own. After a little posing a transformation (no pun intended) takes place where instead of a bland robot, you're faced with Sixhot straight from the comics/cartoon and this articulated menace is immediately a must have. Hanzo has a wealth of articulation and the double jointed chest wings mean that the figure can still be placed into dynamic poses without as much limitation as you may expect. 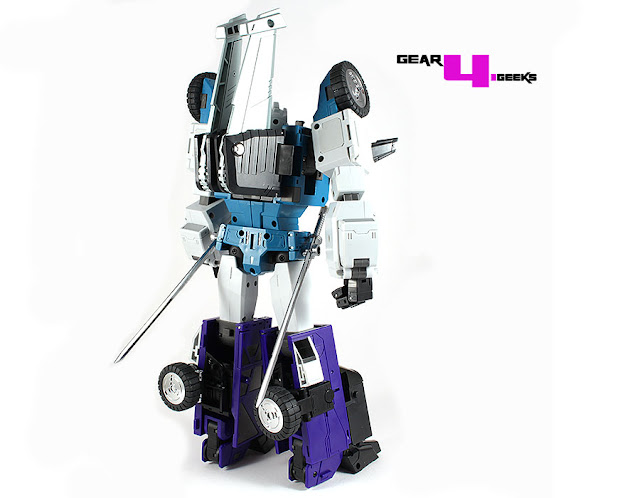 Despite his massive bulk and being slightly back heavy, Hanzo is easy to pose without support and all the joints are nice and sturdy. The only nitpick here is that one of the forearm hatches didn't quite close properly but otherwise this is a solidly built figure much like previous release, Gewalt, was. 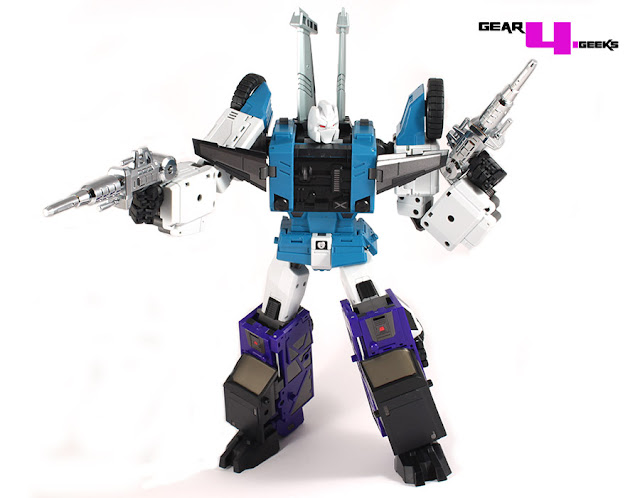 I expected cycling through the six modes to be a complete nightmare and while they weren't particularly fun the first time around, the transformation sequences are deceptively simple. The main thing that has to be mentioned here is the engineering of the figure which is incredible! The lower part of the legs and the various forms they take is seriously impressive and is a quick reminder of why DX9 are one of the top third party companies. 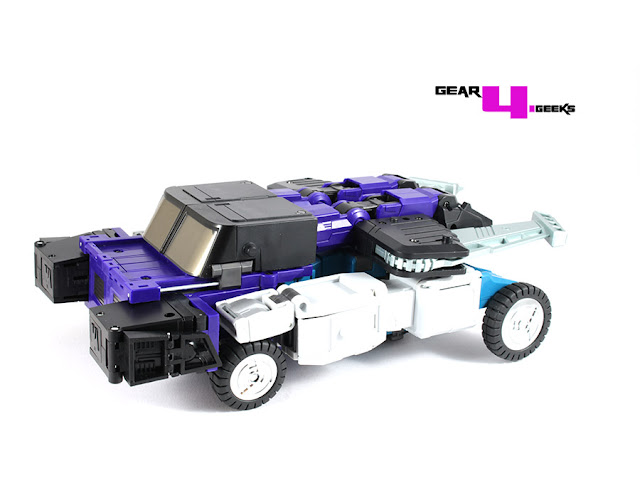 The armoured car mode is pretty accurate to the G1 version and shows that DX9 listen to their fans because we have a fold down flap which blocks off the front of the vehicle which was something Gewalt badly needed. 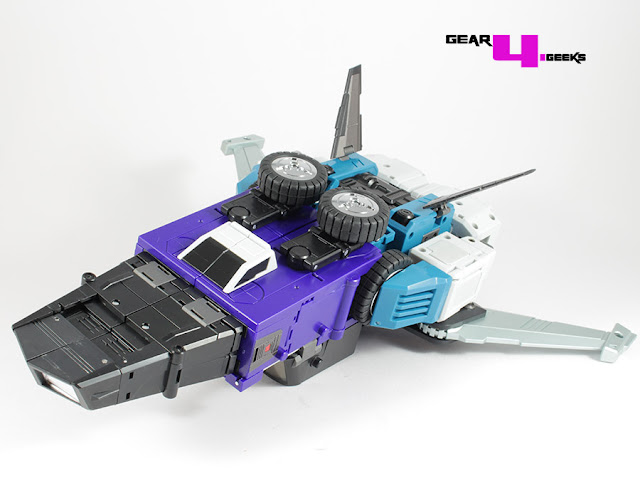 Jet mode is really nice and sleek but sadly let down by the pair of wheels on the top which aren't detachable. Technically they could be moved down to the sides but it is a let down to have the pair of wheels so obviously on display. Hopefully you can now see why I didn't add the extra wheels as they'd detract even further. 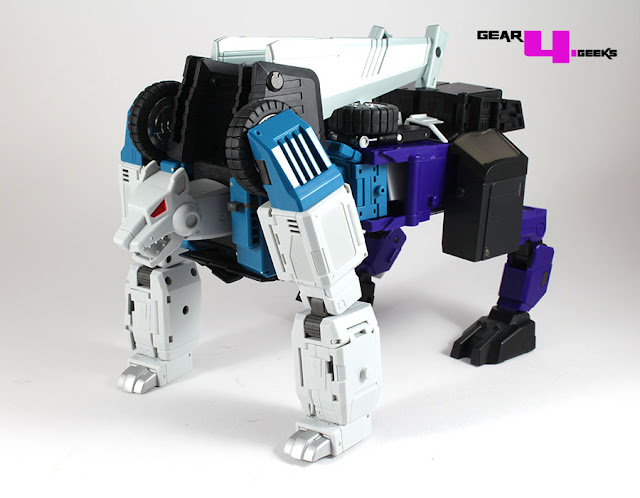 Wolf mode has always been somewhat limited in most incarnations of Sixshot and Hanzo is no different. The head can move downwards and the jaw opens and closes but posing the figure starts to open gaps in the joints which don't look that nice. In a static pose it definitely looks nice and the hole in the underneath of the neck that allows the robot head to be pushed back out is a Godsend as it means you don't have to claw at the robot head with your nails to try and get it back out. 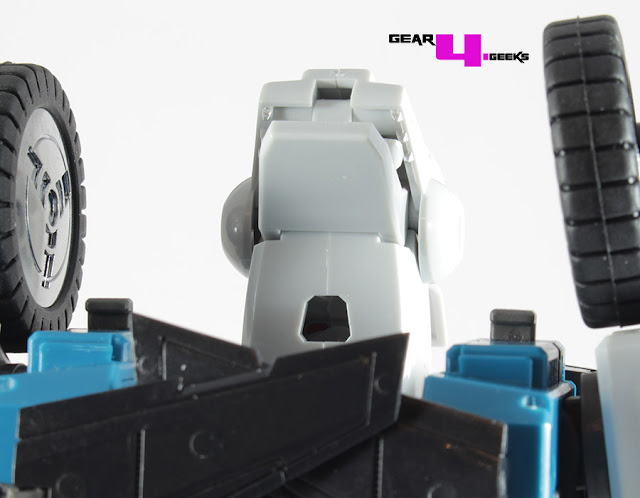 The tank is one of Hanzo's best modes though it's not quite as nice as the Hasbro versions. It feels like making a simpler figure allows Hasbro to make slightly better alt modes whereas the more superior Masterpiece scale and design intricacy makes it harder to come up with something aesthetically pleasing. I cant help but feel that DX9 could have done a bit more with the fold out barrels but the design does work as an AA gun, especially as the gun section can be pivoted backwards to aim up. 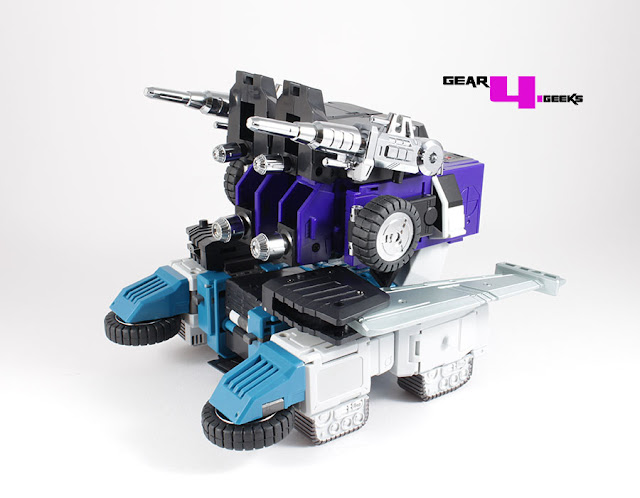 Lastly we have laser pistol/submarine (lol) which has always been an awful tacked on mode to make up the numbers and this version fares no better. 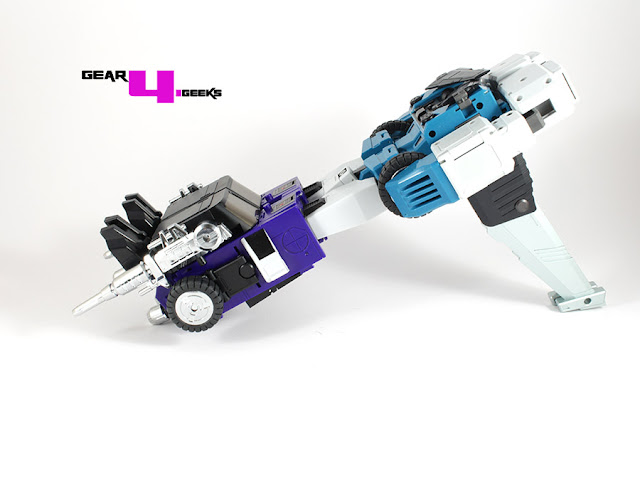 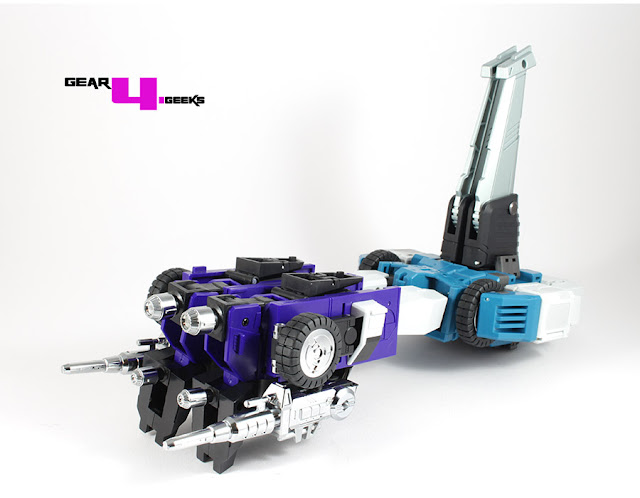 Six changers have always struggled to produce decent looking alt modes thanks to the challenge of engineering multiple modes but Hanzo is possibly the best attempt so far as we have an incredible robot mode and a few decent alt modes plus it's hard to imagine anyone displaying him in anything but robot mode. As much as I love Cassy Sark's Hexatron design and have never found a particular flaw in it, DX9 have built on Sark's work and Hanzo now is without a doubt the definitive Sixhot. 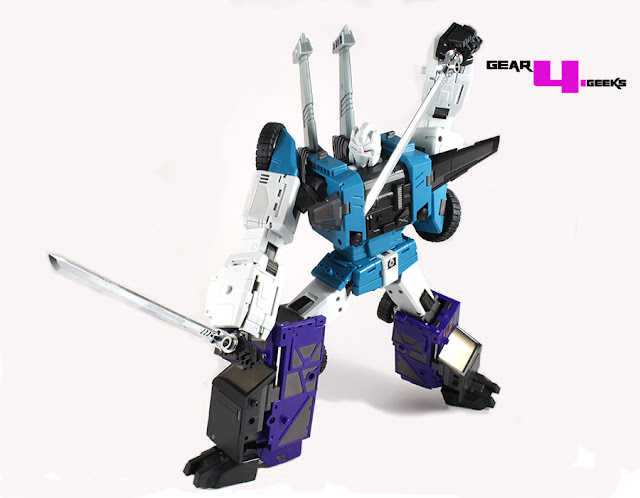 Unsurprisingly Fanstoys have announced that they'll be bringing out their own version called Hydra but with Fanstoys trying to keep up with BadCube, MMC and DX9 plus dealing with their own constant release delays it'll likely be a while before it comes out. At this point, with Hanzo in hand, it's frankly hard to see how Fanstoys can better it. The recent Titans Return Sixhot isn't a contender either but then it's aimed at a totally different market and isn't intended to be a Masterpiece figure. 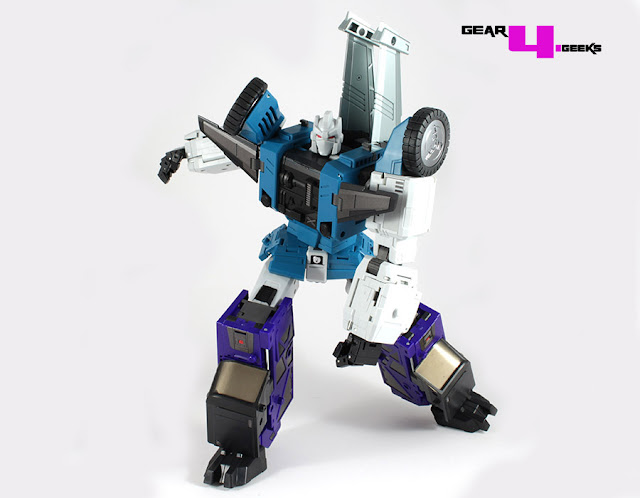 Hanzo hasn't created a huge buzz but then it's important to bear in mind that DX9 don't send out free review samples to every reviewer like other 3P companies do, meaning their products rely on fans actually buying them and giving genuine feedback rather than the product being shilled by YouTube reviewers and their fans. The £134.99 price tag may be a little intimidating, but it's actually a bargain for a figure of this size and quality which also has a strange playability to it thanks to it's menacing appearance and poseability. Despite it being only February Hanzo will definitely be a top 10 contender for figure of the year come December.

You can get your own Hanzo at Kapow Toys for the bargain price of £124.99!

You can read more ramblings by StarscreamsToast on Facebook or the toys section of the Gear4Geeks blog.

Posted by Masterforce at 09:53