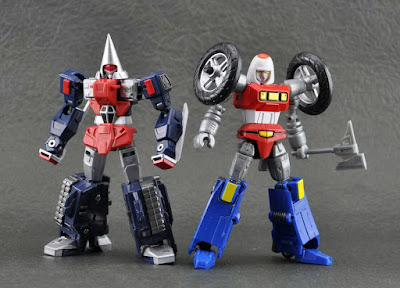 In the toy industry there are very few surprises but last year Action Toys managed to completely stun collectors with their announcement that they were reviving the Machine Robo toyline. Machine Robo was the Japanese toyline that became known as Gobots in the US and it is fair to say that absolutely no one could have predicted its return or the awesome figures we've seen so far. Masterforce caught up with Spencer from Action Toys for an exclusive interview.


Thank you for talking with us today. Can you tell us what led to the decision to produce the Machine Robo line?

Thanks for having me, it is appreciated. First let me tell you, I am with the distribution company who is working with Action Toys to release these. I am working close with Action Toys and the designers as well on the line to ensure good releases and timely releases so no worries there, but I may not have all the answers for your questions. I will do my best tho. I was not with the company when the original Machine Robo license was acquired so I am not sure. My guess is that the designer liked the figures, spoke with Action Robo and they approached the license holder, Production Reed. The rest is history.


It's great to see Machine Robo figures again, what influenced the decision to go with Machine Robo than the arguably better known Gobots?

This comes directly from the license itself. The license is for the Machine Robo Revenge of Chronos Anime. As the anime is based off the original toy line, as is Gobots, you will find a certain amount of crossover. These figures are being done specific under the Anime license at this time. I did mention a while back on a TFW thread that they were based off the toy license but unfortunately I was miss-informed at that time. Since then I have dived deeper into the actual license and can assure you, it is for the anime and not for the toys. Not sure exactly who owns the rights or license for the Gobots right now but I am pretty sure that will not be an easy license to acquire. 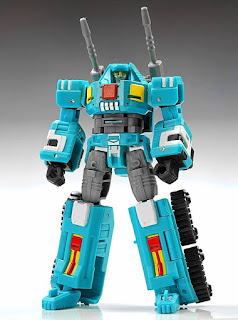 Each figure stands about 5 inches tall, are they designed to be in scale with Baikanfu from Bandai's Soul of Chogokin or are they to be considered stand alone?

They are fully standalone figures. How you display them yourself is up to you of course but they are their own product line and were not directly influenced by an existing product line.

There's been universal praise for how close these look to the anime characters, how important was it to capture the exact look of the characters rather than stylising them?

Again, in this business, a lot of the time license is everything. As the license here is for the anime, it was pretty important to stay close to the anime. Everything has to be approved by Production Reed before release so it needs to remain fairly faithful. 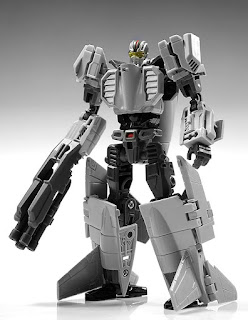 The way each figure changes form seems fairly close to the original toys, was that something you tried to retain in the design process?
It is considered very much. We wanted people to keep a feel for the original yet know this is updated. The size of the figures is just about perfect compared to the size from when you were 10 compared to now being …..what, 30? So the play feel should be close to the same as when you were 10, right down to how it feels in your hands.

The modular bases are an interesting addition, what can you tell us about them?


I can tell you that everyone is very happy with how these turned out and you can be assured they will continue to be released with each figure and there may be a few bigger surprises in the future as well. The bases can be placed together to make a garage, a landscape, a fight scene, an aerial display, whatever you can imagine. Everything had to come together nicely and everyone is very happy how these have turned out. 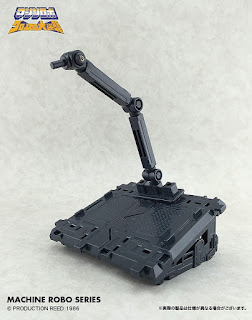 
Series 2 and series 2.1 will be revealed shortly.

The line so far seems to centre around Revenge of Cronos but will we see many of the 600 series figures? The fans seem pretty high on wanting Gyro (Cop-Tur), Buggy and UFO, can you give us any indication if these are in the works?

The line will contain only figures from the Revenge of Cronos. We are unable to create figures that did not appear in the show.

What about the Devil Invaders?
I can’t reveal the entire line at this time, sorry to say. It is a big line and there are figures planned for the next 3 years I believe…..the next 2 for sure. We will see all kinds of coolness in this time.


Can you see Action Toys tackling the combiners or Power Suits?
This has been discussed. Not sure if it is feasible as the figures are all different sizes. No clear answer at this time

The big question everyone seems to be asking is about Porsche robo. As the Machine Robo version was white, if it is produced, will there be a black version to keep Crasher fans happy?

Thank you again for speaking with us, are there any last words you'd like to say to the fans out there?


Everyone involved in this is very excited and we hope that everyone out there, either Gobots fans, or Machine Robo fans, toy fans or show fans will enjoy these. There is a lot that has gone into this and we will have some surprises for future releases as well, maybe even a few items that never did hit North American soil. These are designed to be fun, enjoyable and with a little bit of WOW with each release. We do welcome any and all feedback and even if we can’t always reply to everyone’s ideas, we do listen. You can find us on Facebook at https://www.facebook.com/Machine-Robo-606937242796422/. Thanks for your time and thank you so much for your interest.


You can exclusively preorder the Machine Robo line from Kapow Toys in the UK. Once released the figures will also be available at Masterforce.
Posted by Masterforce at 05:02