This toy is weird, man.

It's the kid in high school who had the confidence to not lead, not follow and make not fitting in cool as hell. It's the album you fall asleep listening to through headphones even though it’s insane grind that should only ever be played through the biggest **** off speakers you can find. Translated into toyspeak, Grant is an anomaly. One that dares you to pigeonhole him when holding the figure up against your own collecting standards and one that laughs in your face while you're doing it. 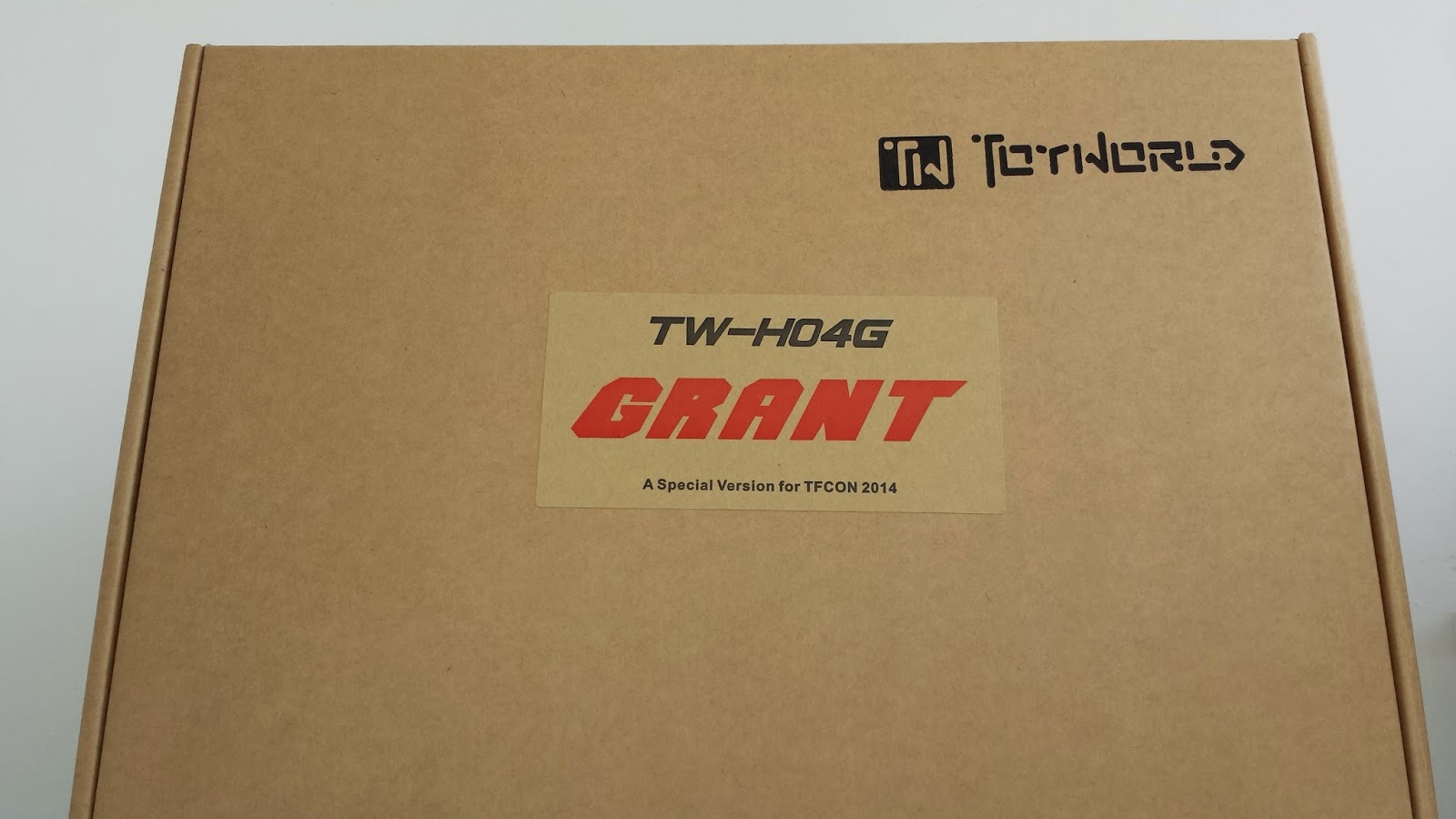 Do you know much about this Toyworld figure? In a nutshell it came out of nowhere in 2014 as a TFcon exclusive, presenting the collector with an Ultra sized approximation of the G1 Headmaster Grand Maximus. That being the Japanese only repaint of Fortress Maximus. And when you whack open the very nondescript packaging and gaze into the styrofoam, G1 is exactly what you’re looking at.

This is very 1980's. There’s nothing modern looking about Grant, he’s just right angles and boxes atop more boxes, chucks in a bit of partsforming on the back of the shoulders and while for my sins I have never handled a G1 Maximus of any variety, the initial vibe here might be ‘downsized knock off’.

But dammit if this thing doesn’t impress taken out of the box. 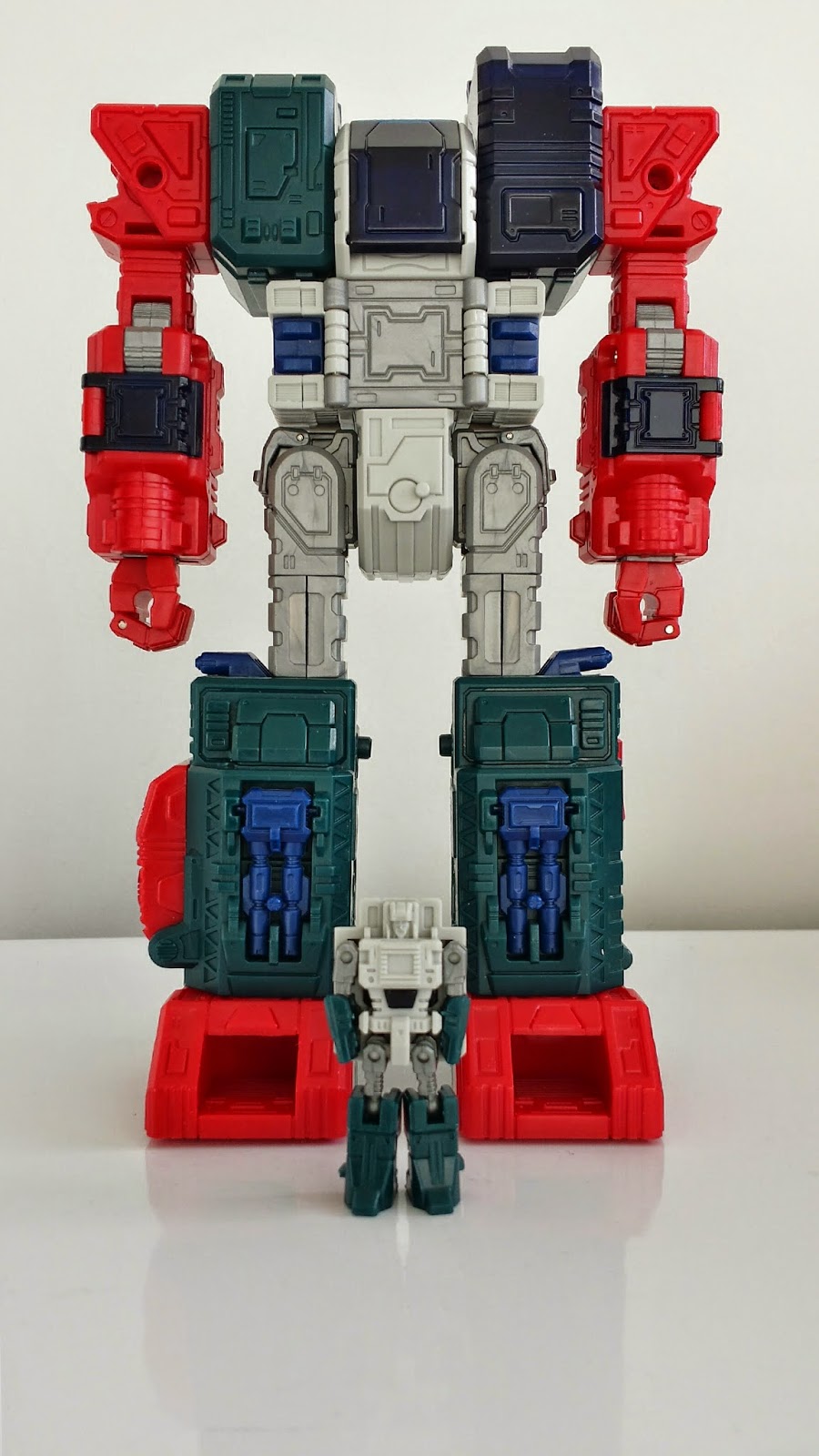 In hand there’s a good weight and some really solid feeling plastic. Like, better than official on a good day solid. The sculpt is wonderfully detailed with raised surfaces, layers, panels and circuitry all over. There’s no paint on either figure though. Not a lick. Just the basic plastic colours. But to my eyes it looks far from cheap and compared to the cornucopia of painted delights surrounding me, quite the refreshing change. It’s a stylistic choice, undoubtedly not for everyone though one that adds to his exclusivity. And the package does include a comprehensive decal sheet. More on this shortly.

Because before that, there’s the small matter of Grant’s articulation. And this is where things get good as in spite of first impressions, this guy is loaded with it.

While not an exhaustive breakdown, highlights include ratchets everywhere, double elbow joints, a waist joint, bloody ankle tilts and wrist swivels. Opening hands?? What the hell is going on?! This level of poseability flies in the face of his utter Generation 1 looks because this is proudly and defiantly not a Classics or MP styled toy.

There is a strange clash here, where modern day articulation meets 1987 Transformers brick. That clash sees Grant stand out against Toyworld’s own Headmaster aesthetic as well as FansProject’s Function X line. It’s like somebody took a bullied and broken G1 figure and totally pimped it, sending it back into the toybox to wreak revenge laced havoc and is a style that, outside of the Infinitor repaint, currently exists on its own. I find Grant’s robot mode compelling. 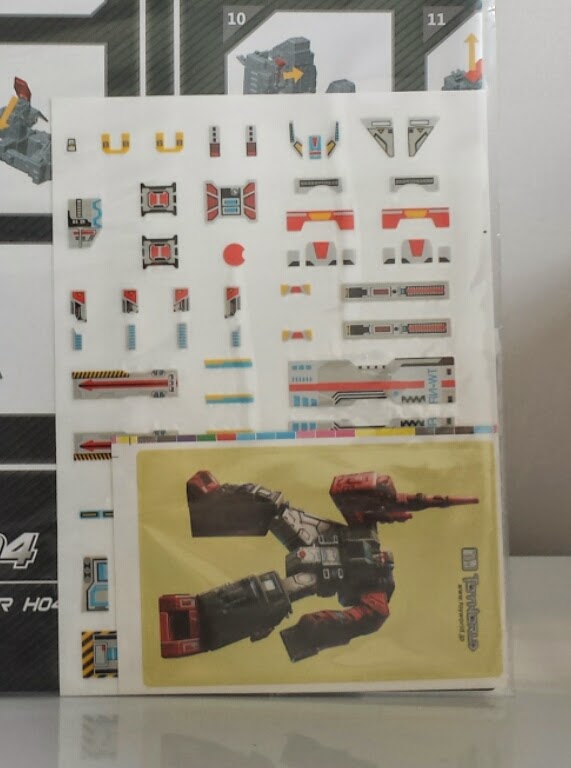 So that decal sheet. Whether you choose to keep his plastic virginal pure or not, as you will see there’s no denying he scrubs up well with these bad boys affixed to his chassis and it's almost essential for city mode.

There are two downsides here though. The first being that the decision to leave the highlighted details solely to decals may really rub you up the wrong way. If that’s the case then the fully painted Fort Max homage Infinitor may be more your bag.

The second is the time consuming nature of doing it right and offering advice without boring you to death. These are not a simple case of peeling off a sticker sheet and applying to your toy, removing them if needs be to rectify a wonky placement. They’re individual adhesives that sit on backing paper affixed to a clear sheet . And once pressure is applied to that clear sheet they’re on Grant and staying on. So getting it right is both paramount and I will admit, intimidating when starting out.

To make things easier, you can cut around them and lift them from the backing paper which enables you to line them up before committing to placement. My advice is cut them out individually, apply them individually and take your time. It’s worth the effort and if you screw up (like I did) it’s only ever going to be noticeable to you. Ask someone else and they will call you out on being a perfectionist madman and scold you for the blood in your eyes. 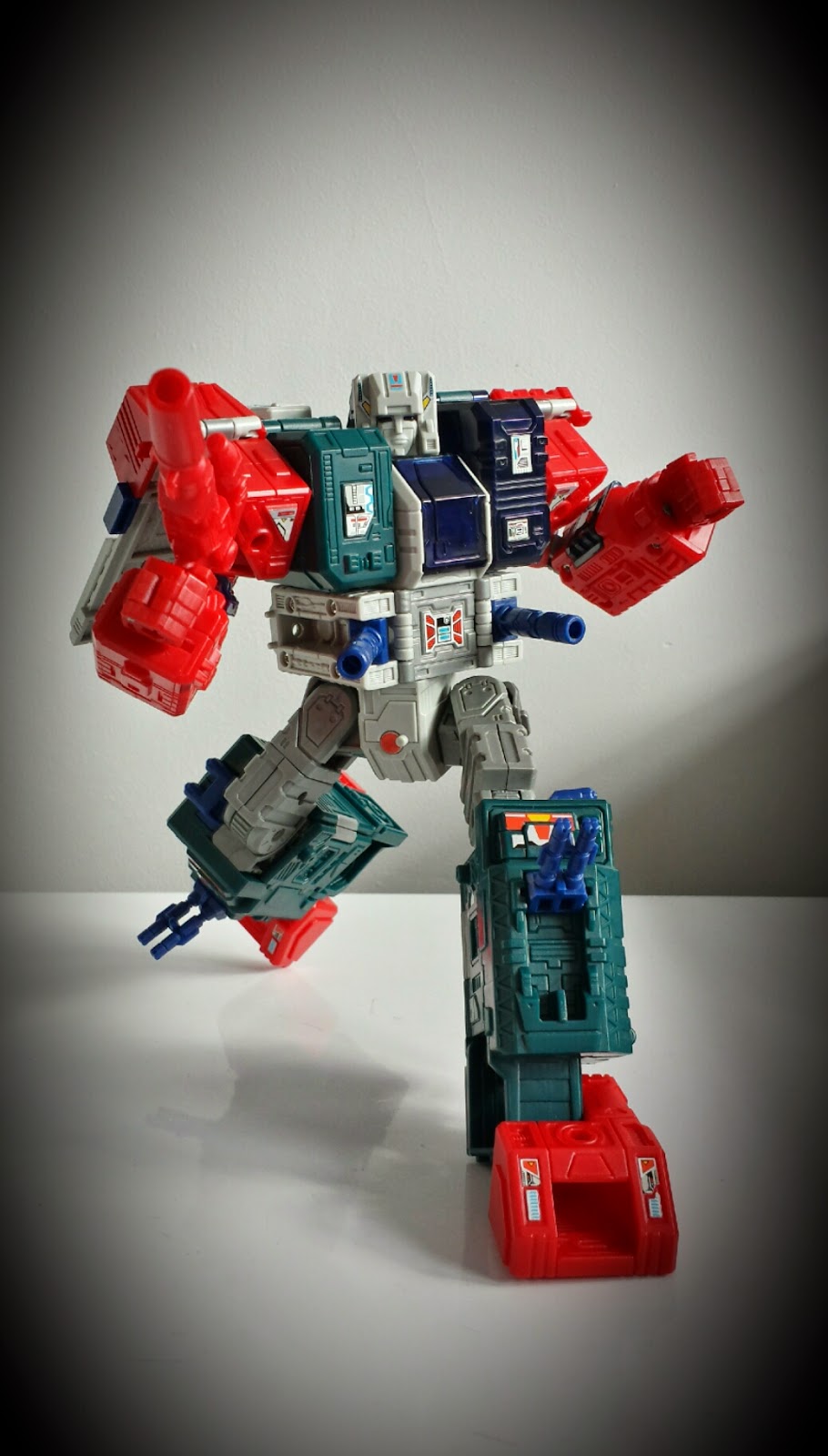 The end result though? Worth it.


Keeping in line with his G1 aping style, Grant transforms into both a space cruiser and a city. It’s a very simple transformation into both. Although for me things tend to come apart here. Because as good as the articulation updates are to the robot mode, they don’t really add a great deal once transformed and with this figure being more than a tad smaller than the 2ft tall original I have a massive feeling that size was what made the original toys alt modes a big deal. 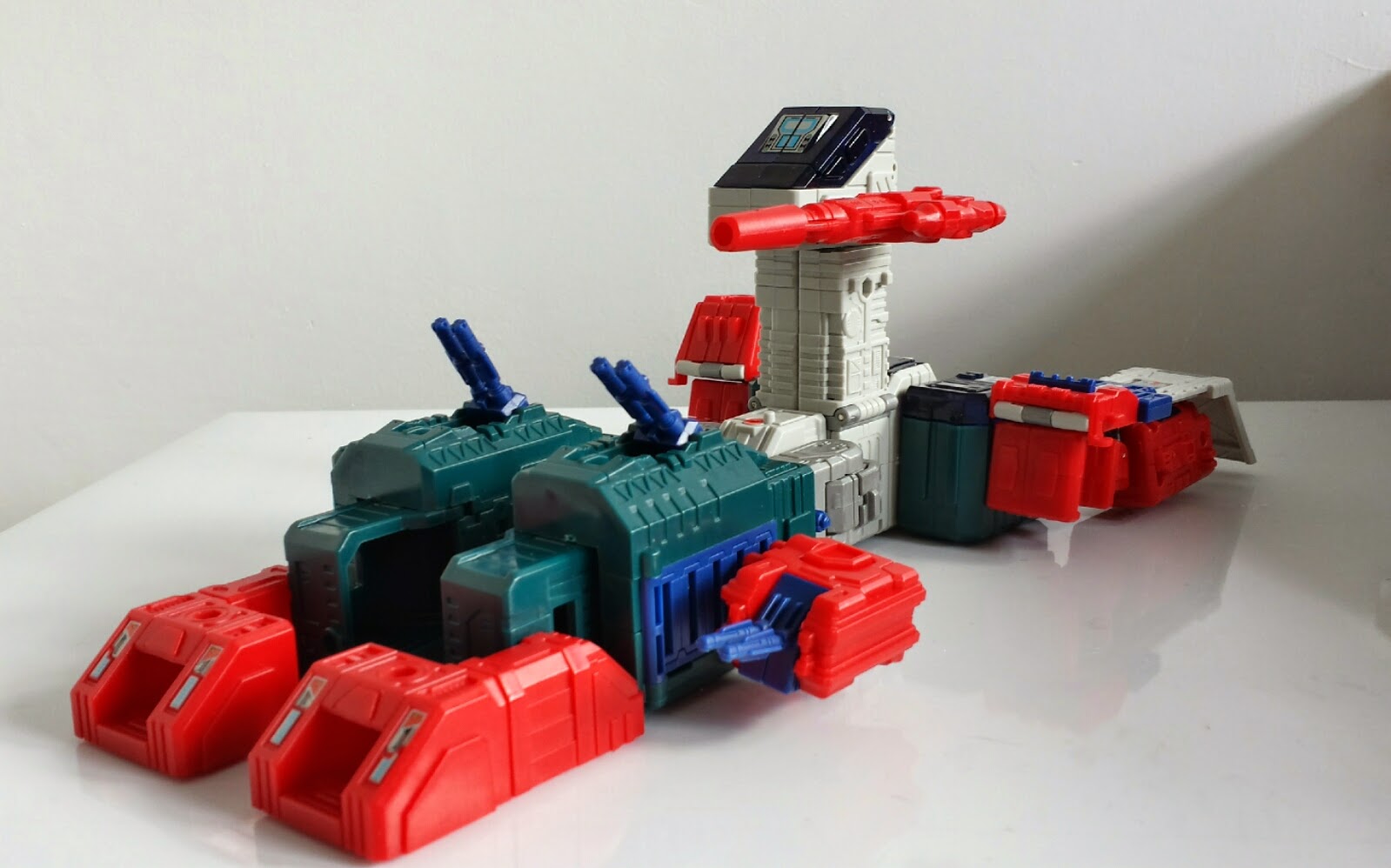 Here we have a robot having a good lie down through space. It’s daft, a bit like a stupid looking sphinx but I do like it. His head can fit inside the translucent blue canopy and pilot it too. 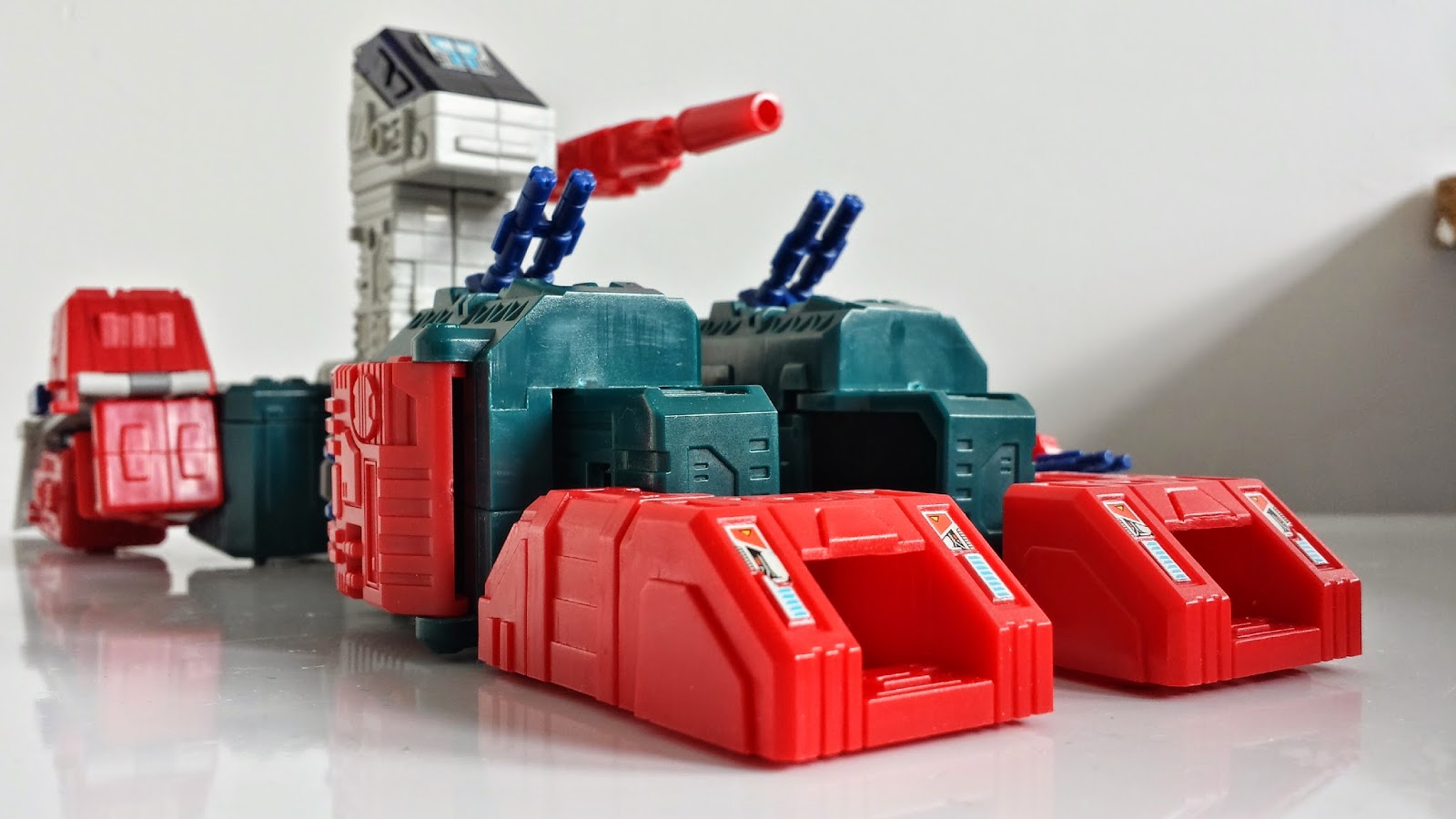 At this size,the other mode really can’t be called a city any more. It’s not even a shopping centre. Maybe it could pass as an upmarket Bargain Booze next door to a chippy where kids hang around getting smashed on Lambrini and legal highs. Or a battle station?

Credit where it's due, the decals come into their own in this form, with tons of little incidental details like windows, safety markings, ramp directions etc. 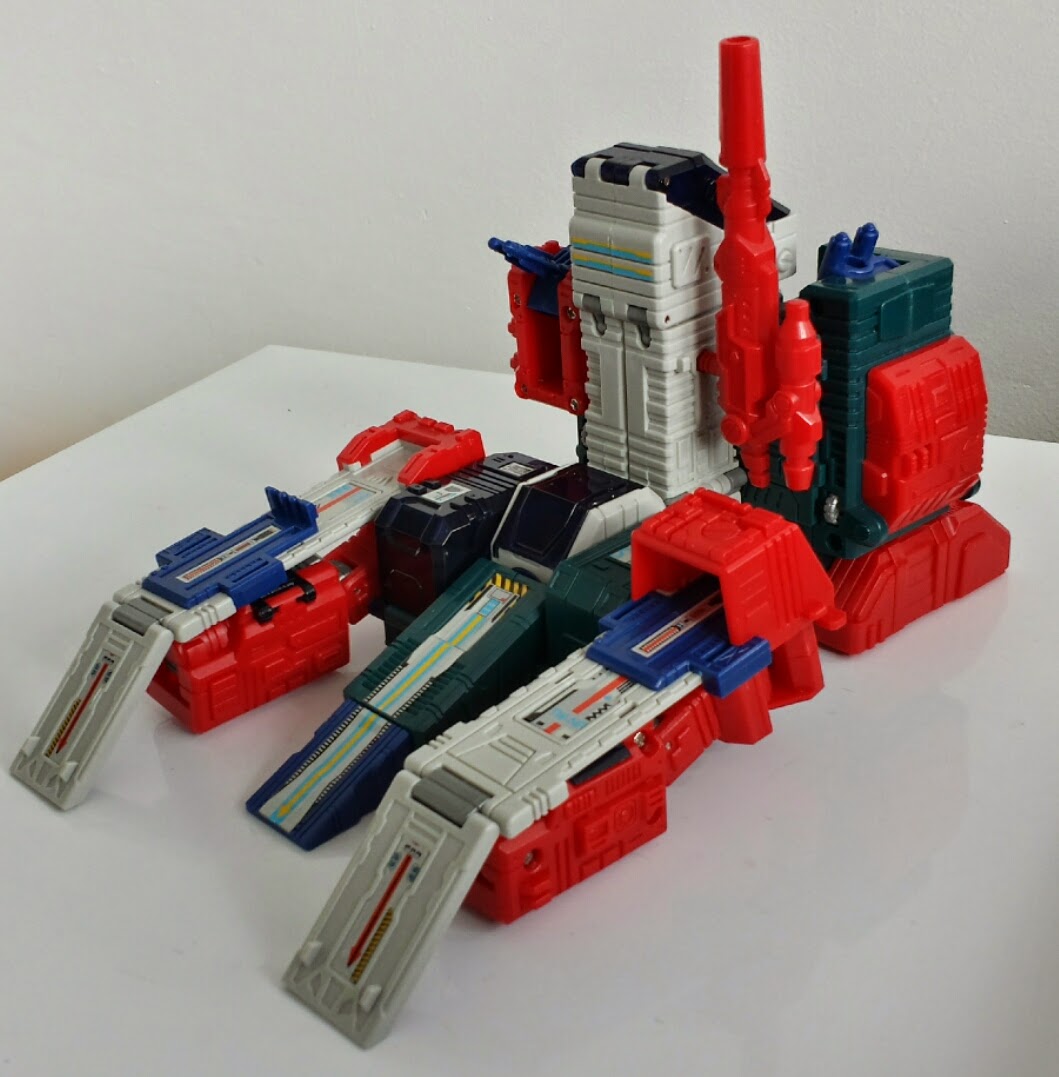 And though Toyworld have concocted an amended city mode of their own, it’s simply borne out of the joints found in the robot mode and screams fan mode/trying too hard.

While I am not a fan of the city and the cruiser is just silly fun, the robot mode surpasses expectations. There was a gamble Toyworld made in making Grant so much truer to the G1 toy than their previous Headmasters and it's a brave one that flirts with putting the figure in a collectors no mans land. 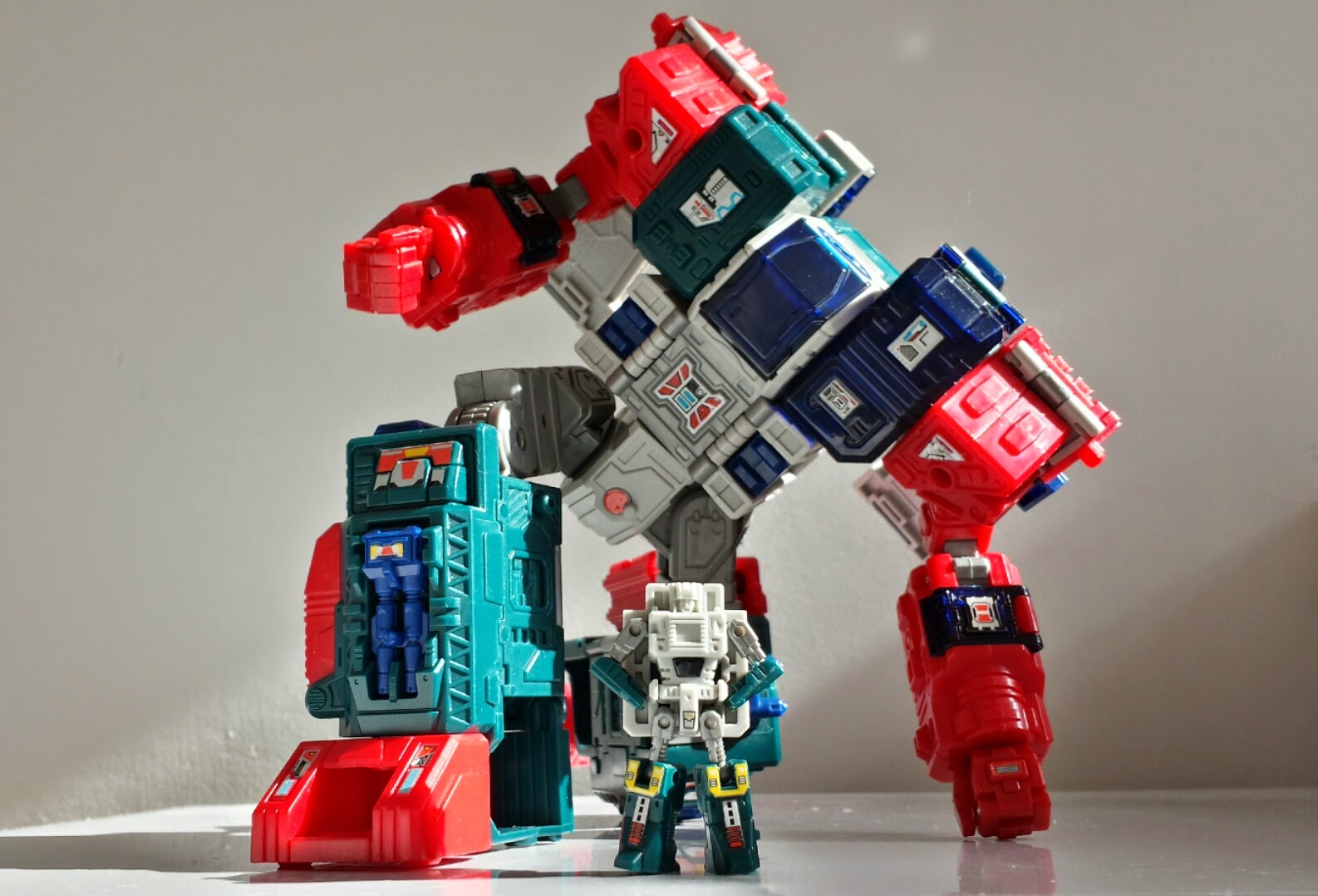 But I'll take that gamble. Grant makes for a stunning robot. On one hand utterly familiar and on the other pretty damn unique, it's a figure that sidesteps current trends and needs to be experienced in person to truly appreciate. You going to need to be a patient soul when dressing him for dinner though.