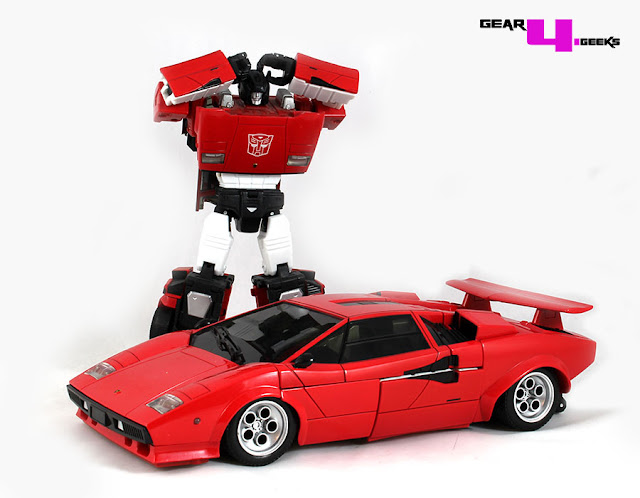 It's been 4 months since the last blog entry so, uh...Hi!

Masterforce is still on hiatus as I'm sure you're all well aware. I sold the business on and the new owners are yet to open, but all preorders that had been paid with Masterforce are being honoured by the lovely people at Kapow Toys.

In the last 4 months I've been trying to relax a bit more while still working on the Gear4Geeks blog when I have time and trying to improve my photography skills as covered in a previous blog post. I have a Facebook page I set up recently for my photographs though the page is still pretty new and I have no other social media accounts for it. Many collectors experience that burnout about their hobby when there's a lot of new product coming out and when you run a store selling the stuff then the burnout seems to be a little more often, so the last 4 months have been good for getting reacquainted with Transformers and learning to love them again. 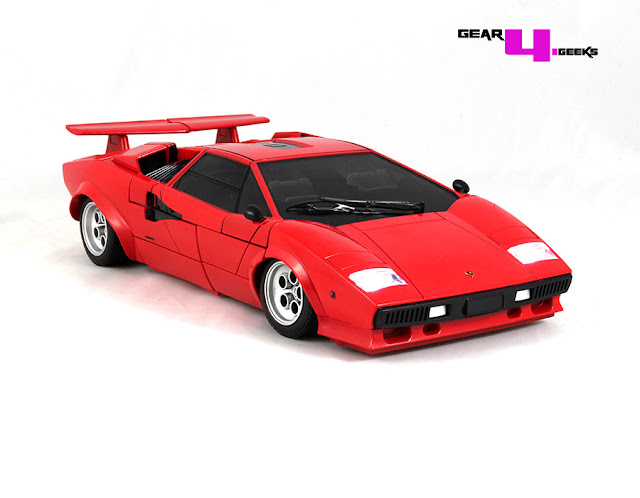 The first new love is the oversized Masterpiece Lambor (Sideswipe to you and me) from Tanaka. I really hate straight KOs but oversized and anything weird and wonderful I can live with and this figure is both. Not only is it huge but it also has lights built in to the weapons and the car headlights! It's really hard not to love a KO that is this well constructed and also is a little bit of an improvement on the original. 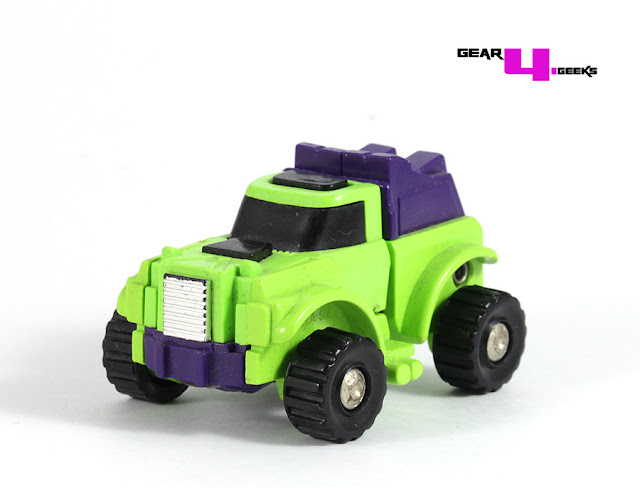 Old friends are nice to get acquainted with too like this Constructicon coloured Gears from Brazil. I love my Minibot variations and this one is my personal favourite by far thanks to its colour scheme. There are conflicting opinions on the Brazilian Minibots but as they lack any Takara or Hasbro copyright stamps it is entirely possible that Estrela may not have had permission to release any Transformers, making them bootlegs. It's a new and interesting theory as they've always been considered to be official releases. 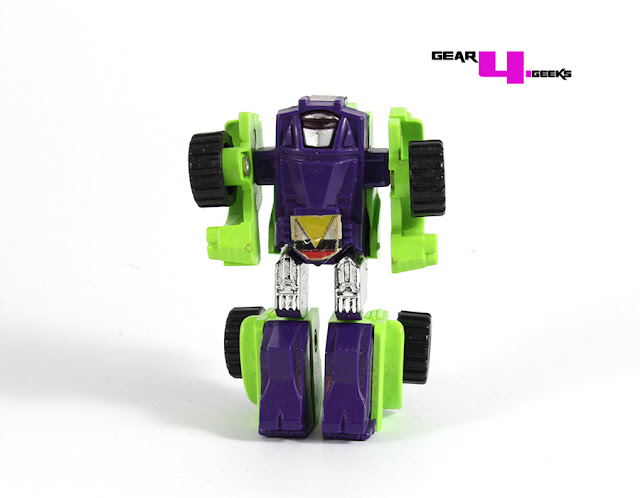 Official or not he's definitely a sweet figure. His Mexican friend below is definitely legitimate though. 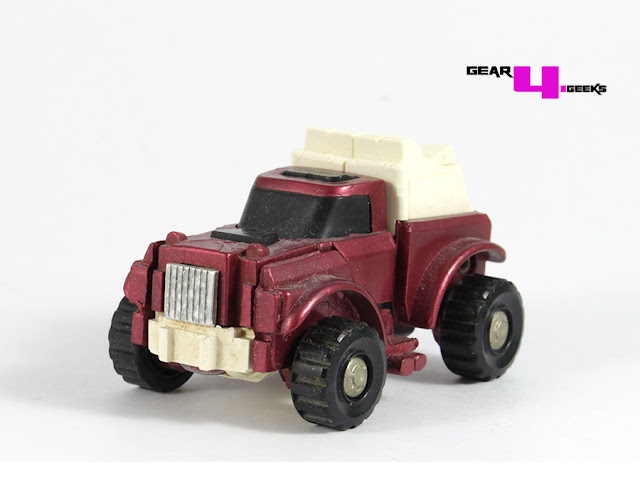 This (dusty) Swerve was produced by Plasticos IGA S.A. or IGA for short and released in Mexico. The colour scheme isn't quite right for Swerve as this features cream colours and a metallic wine colour instead of red. Not just that but... 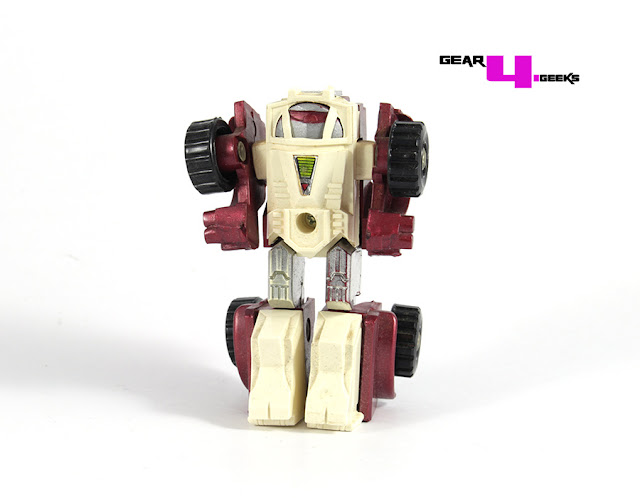 IGA didn't have the Swerve mold so they improvised and just used Gears without modifications. Also worth noting is that IGA were really inconsistent with their plastics and you can see here that under the chrome on the legs, one leg is molded in the cream plastic while the other is in the burgundy colour. My Minibot collection is a lot smaller than it used to be as I didn't really need to have 7 carded Seaspray variants. 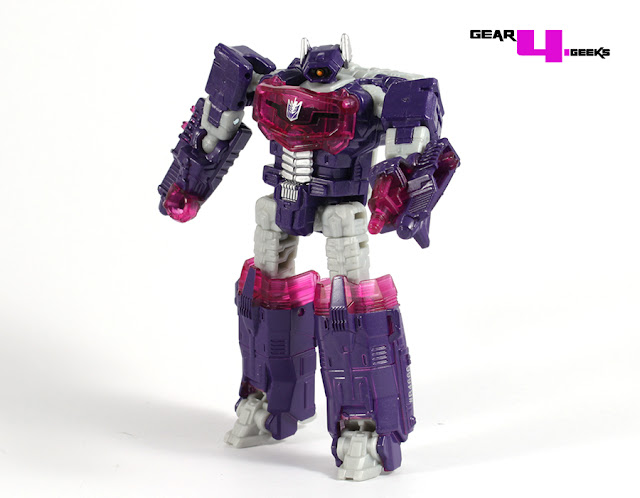 Another cool little chap is the Legends Class Shockwave from Combiner Wars. The figure was the only one people really wanted from the assortment it was in so became pretty hard to find at a reasonable price until they showed up at discount stores here in the UK recently. Shockwave is a really good example of how good small figures can be and how Hasbro can hold their own against the third party companies. 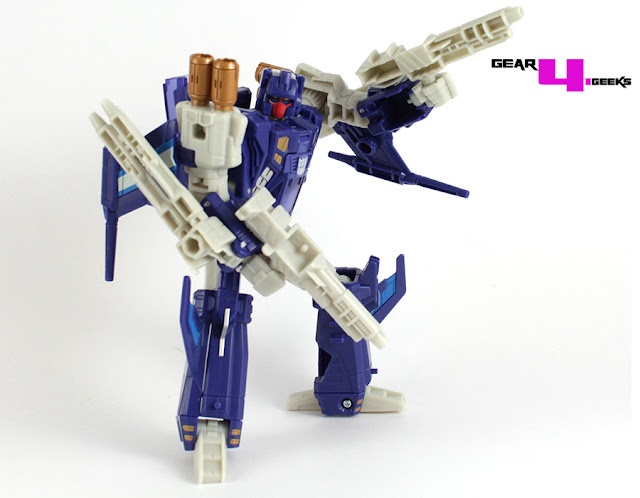 The big surprise for me was how much the Titans Return line has won me over. The Target/Head/Power Masters weren't my favourite era of G1 though some of the character designs were pretty sweet. Titans Return has done a wonderful job of turning the immobile G1 bricks of the past into highly poseable figures while also being faithful to the Headmaster gimmick. Most of all the range of Titan Masters and their little vehicles give an extra dimension to the range allowing for customisation. 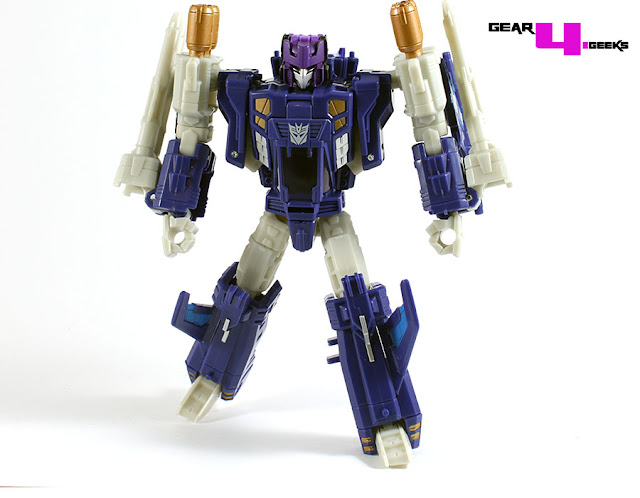 Behold, Happyface! As much as I thought the Titan Masters were pretty awful at first they are even nice as stand alone figures though some are better than others. 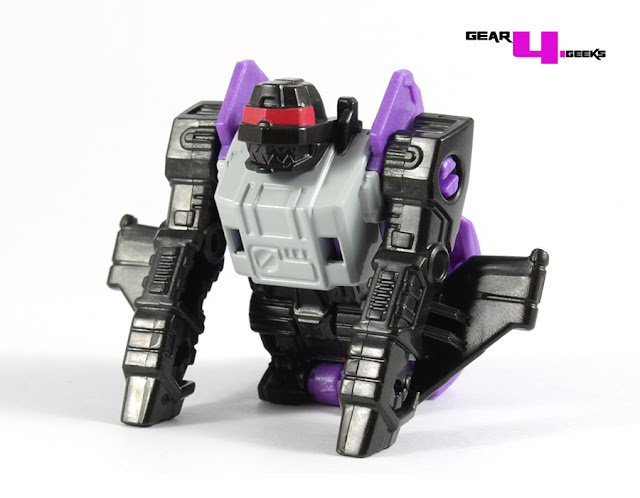 Apeface is a definite highlight as is the head mode of Brawn which is the best sculpt of that figure's head possibly ever. 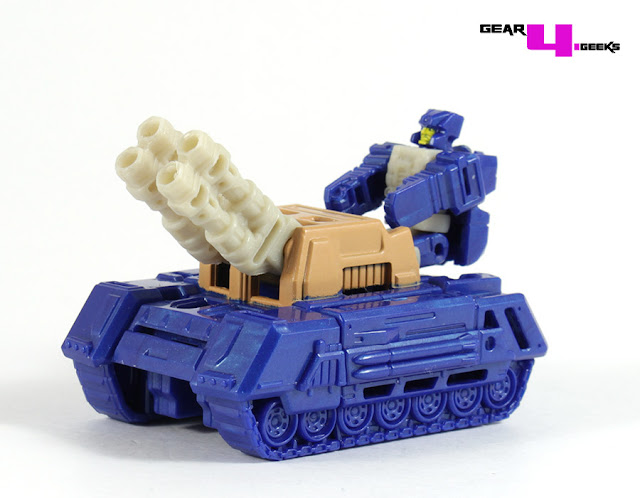 There's a little bit of a Micromasters flavour to the tiny vehicles and it's hard to not like them once they are in hand. Personally I'd have liked the range to have been upped to Voyager Class instead of deluxe so that these mini vehicles and especially the Titan Masters with their beautiful head modes could have been bigger. The deluxe range could have been dedicated to Targetmasters where the Titans could have been smaller. 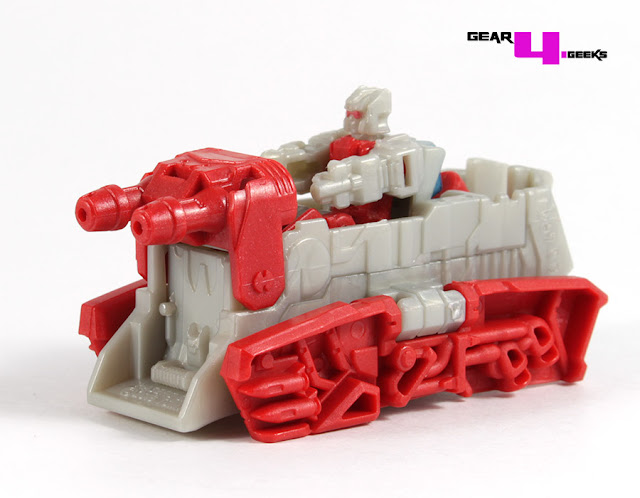 As usual Hasbro and Takara have tried hard to cram everything in so we have transforming vehicles that also become really dire guns for the larger robots. 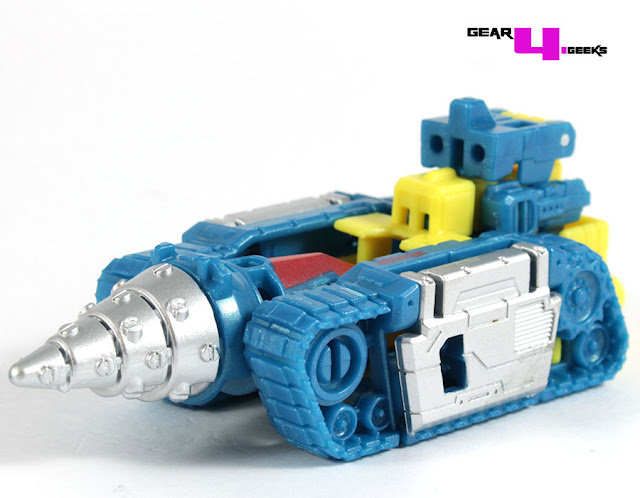 However the options of the Titan Masters riding the vehicles or kinda merging with them is a very cool one as it gives a little more playability and display options. 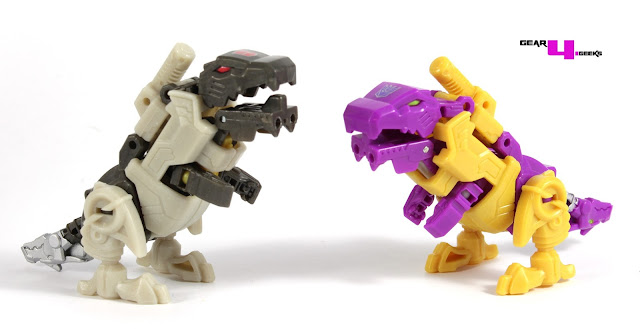 In the case of Clobber and Crashbash, a quick parts swap gives a more Grimlock accurate Clobber and a G1 Flamefeather! For perfection, remove the screws from the Titan Master bodies to swap those parts over too. 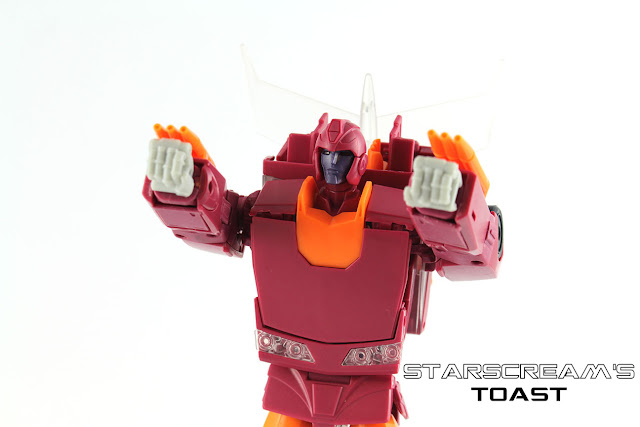 It's also hard not to love a test shot. Hot Rod here was going to get his own article at one point but that ship has kinda sailed now although he's still nice to look at. 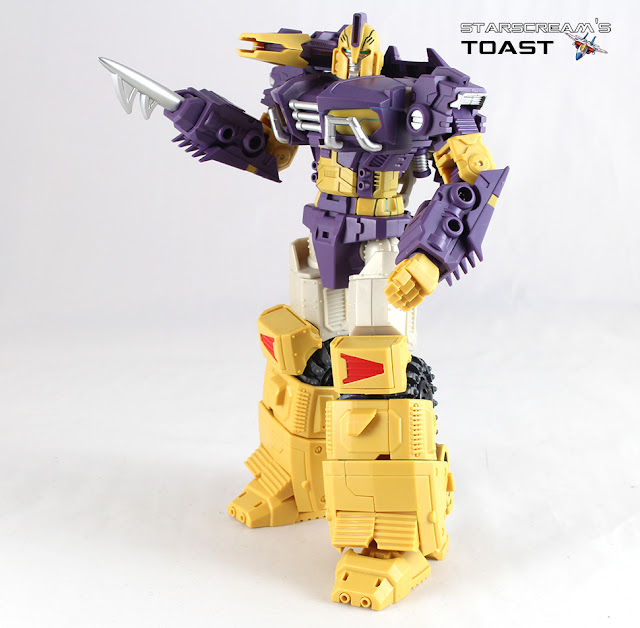 A figure I missed the first time around was MMC's Spartan. He's a marvel of engineering that is a great reminder of why Cassy Sark is one of the best designers out there. The one let down of this figure is MMC's dedication to remaining in scale with the CHUG/CW/TR scale rather than jumping to Masterpiece scale like most third party companies have. Speaking of scale... 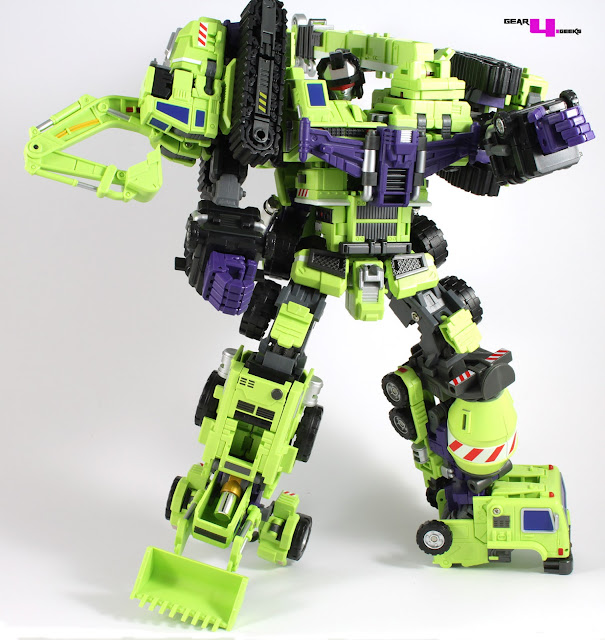 Maketoys' Giant is another figure that lives in the scaled-to-deluxe universe and really doesn't fit into a Masterpiece collection although it's still one of the best Devastators to be released. Only a few years back Giant and TFC's Hercules were the very peak of the mountain and now Hercules is very much unloved while Giant remains in the domain of die hard fans and deluxe scale collectors. 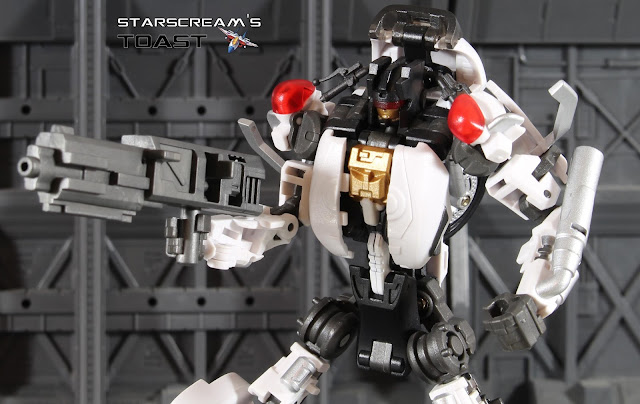 The last figure I'll mention here is Maketoys' Axle. I've never rated this figure at all but in hand it's somewhat different. Sure, Combiner Wars deluxe Groove is now the must have version of the character for now but Axle is definitely a lot better than he ought to be. He is more of a mech than a Transformer in a lot of ways but he's an ultra poseable figure who's very playable although his transformation is precise and unforgiving.

With Twinstrike, Chromedome and Highbrow all sat in the packages waiting to be opened there's still more to discover and the third party scene has seemed to heat up again with Fans Toys and Gigapower competing not only in Dinobots but in Omega Supremes too. It's an expensive year to fall back in love with Transformers.

You can read more ramblings by StarscreamsToast on Facebook or the Gear4Geeks blog.
Posted by Masterforce at 03:55